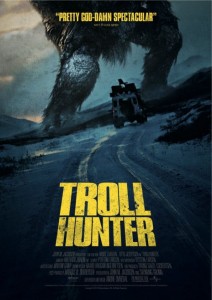 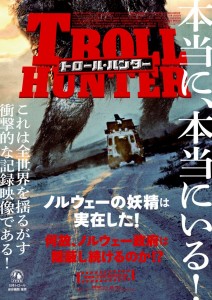 Trollhunter is first and foremost a fake documentary, then a subtle comedy, and then a horror movie. And even then it’s not really horrific, but it does contain many standard elements of the genre. The documentary aspect influences the proceedings more than anything, though, so instead of a true narrative we’re given more of a series of connected events. It’s like a horror documentary where the stuff of dreams and nightmares are brought to life in such a credible way that you can’t help but believe it’s real and get wrapped up in the fun of it all. If you have a general knowledge of troll stories, you’ll also get extra enjoyment out of the film as it skillfully weaves many of the old tales into the film’s details, making the film the rich, thrilling experience it is. But don’t forget, it’s also a comedy. It’s subtle, dark humor, but it’s there, and it’s fantastic.

The first time you see a troll on-screen, the awe was palpable in the room. As the characters were shocked, so was I, as I had some assumptions that we’d be hunting the troll for most of the movie instead of encountering one about 30 minutes in. It reminded me immensely of how I felt the first time I saw the dinosaurs in Jurassic Park. These wonder-filled moments are when filmed fantasies are the most impressive to me, as instead of foreign worlds or magical lands, we’re presented with history brought to life in fantastical ways. The film was shot on location throughout Norway, and the amazing Norwegian countryside adds gravitas to the film’s images, as it’s hard to look at their impressive mountains and not imagine some sort of troll or fantastical creature living within them.

For some reason, it’s hard for me to specifically articulate my thought about this movie. It’s simply awesome, and as a fan of fake documentaries, trolls, and dark humor, it feels like it’s aimed directly at me. I’d say that if you enjoy the fantastic and you don’t mind handheld camera too much, you’ll get a kick out of Trollhunter. And, of course, because this is a successful foreign movie, the US remake rights have already been picked up, so expect Middle America Troll Hunter starring Brad Pitt or some other suitable hero to hit the cinemas sometime in the future.