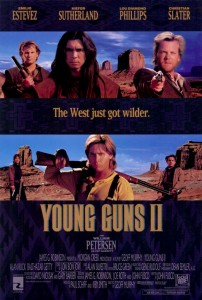 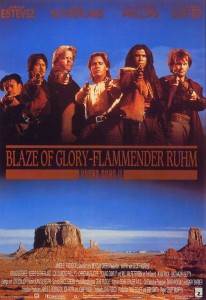 But make no mistake: the things that Young Guns II gets right over its predecessor are many. First, the direction is much better here. Geoff Murphy took the reins and shoots the film very handsomely, filling the screen with many gorgeous shots. Murphy is also capable of telling a cohesive story, allowing Young Guns II to be much more understandable to me than the original. This is probably thanks in part to the much better script, but a fantastic script doesn’t guarantee a fantastic movie. It’s up to the director to bring all the elements together, and for what it’s worth, Murphy does a good job. It’s interesting to note that Murphy was asked to helm Predator prior to the studio hiring John McTiernan. I don’t think he would have done nearly as good of a job as McTiernan, and if that had happened we may have never had Die Hard in the form we all know and love. Let’s move on… I can’t bear to think of a world without Die Hard.

While Murphy does fill the film with many great shots, they worked on me in a way that was not intended. By having vistas that recalled better westerns, specifically the iconic work of John Ford, my mind wandered to his many films featuring John Wayne, and then continuing into the idea of reviewing some of those and what the poster might look like if I made it into some sort of Wayne Fest. I’m not actually going to do that, but it gives a good picture of how engaged I was with the film at hand. This was about halfway through, which is much better than minute 15 for Young Guns, but any film that I lose interest in, in such a complete way, just isn’t my kind of movie. 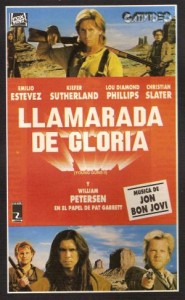 If I can say anything complementary, I did truly enjoy the main theme of the score by Alan Silvestri.  I’m a big fan of Silvestri’s work in this era, and while this score is not one of his best, the main theme is really fun and fits the film well. It uses western sounding melodies played on synths, so it recalls the past while retaining a “modern” sound. The track also features a fuckin’ killer 1990 bass line and drum beat, which send me directly to film score heaven as soon as they kick in. You can hear it here. Anyway, throughout the movie they play this track, and no matter how I was feeling about the film directly before, I always brought out my goofy, arm-flailin’ air drums as soon as the song dropped its beat.

I also enjoyed Lou Diamond Philips quite a bit. His acting was a little too serious for my tastes, but I’m a sucker for the clichéd “spirit world” talk that nearly every one of his dialogue exchanges contains. His best line comes early on when he states that, “When the spirit horse comes, then it’s over.” In case you missed it that time, he brings up that old spirit horse every chance he gets, making sure that everyone in the audience, even the ones that tuned the movie out long ago, will understand what inevitably happens to his character at the end of the film.

You also get a couple of scenes with James Coburn that are great, as well as a few with future star Viggo Mortenson. While Coburn’s presence livens up the middle of the film, he’s too good for this movie and it only reiterates the fact that this film is mostly populated by actors that have no business being in a western… at least any western that I’m watching! The worst of the bunch, for me, was Christian Slater. I’ve never really liked him and because he’s the same in nearly everything, I didn’t think his cocky, misunderstood teen schtick really added anything to the film.

Through all of this negativity, Young Guns II is a huge step up in quality from the first film. Despite still being disjointed and somewhat poorly constructed, it’s such an improvement over the abysmal original that I have to call it a success (in terms of the series only). It also manages to let me know what the first film was all about in a couple of quick lines of dialogue, something the entire first film failed to do. I don’t know, this one feels like a film you’ll still love if you loved it in 1990, but anyone that didn’t see it then should probably steer clear unless you’re big on blatant heartthrob string-pulling films, in which case Young Guns II will definitely provide you with some entertainment.

What was that? I think that was my spirit horse whinnying, so I guess that means this review is over.