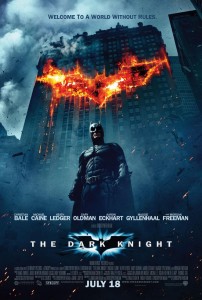 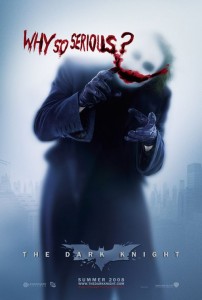 If Batman Begins was Nolan dipping his toes into Batman and attempting to pull off a great comic book film that felt realistic, then The Dark Knight is Nolan jumping headfirst into the lake. The Dark Knight is immediately different in its feel: where Batman Begins had overtones of comic wonder and fantasy (the monorail, toxic gas, etc.), The Dark Knight has a real city with not much else besides guns and giant explosions. It doesn’t even feel like the same city to me because the visual tone is so much closer to reality here. It gives the film its own heightened quality that lends an intensity to the action, and it’s probably a big reason this one is more popular than the previous film.

Nolan is also even less concerned with placing Batman in heroic situations in this film. It’s called The Dark Knight for a reason, and Nolan makes good on the promise of the title by delivering a very dark Batman film. It took balls to end a giant, highly anticipated Batman film with Batman running for his life from the cops, but that’s exactly what the city and this movie needed. I wanted to leap up in delight when I saw it in the theater and I fought the urge to do the same thing this time at home. I love a good dark ending, especially when it holds as much weight as it does here, and the end of The Dark Knight is nothing short of perfect. 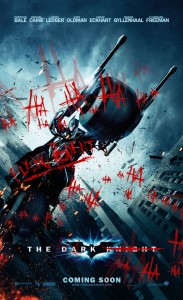 But the movie is long, and while it’s certainly justified, I find the first hour a bit tedious and unfocused. It sets up everything to come, but I feel like there could have been a better way to go about getting there. While the opening bank heist is a fantastic way to blast into the picture, the following parking garage thing with Scarecrow and Batman feels so strange and unnecessary. Why is it even there? To set up that there’s copycat Batmen so that Joker can kill one halfway through the movie? To give Cillian Murphy a paycheck for a day’s work? The scene gives Batman an excellent opportunity to jump onto a van — creating one of the coolest looking Bat-moments in screen history — but the scene overall feels superfluous and strange.

The first hour is never boring, it’s just that so much is going on and being set up that it’s easy to start to lose track and wonder what we’re supposed to focus on. This all changes once Joker reveals that instead of the simple chaos factor he appears to be, he’s actually got a cascading effect of dire shit taking place and y’all just played right into his hands while you thought he was playing into yours. This type of moment happens a couple of times throughout the film and it’s masterfully done. I’ve seen the movie before and it still sideswiped me a bit as I had gotten all wrapped up in the story.

So speaking of Joker, he’s fucking awesome in this. Heath Ledger is brilliant, bringing to life the Joker like never before. I balked immediately when I heard of his casting, but boy did he prove me wrong! This version of the Joker is everything I could have ever wanted in a filmed Joker, regardless of the fact that it eschews many of the things most closely associated with the character. Things like his chemical burn origin, the lapel flower and all the gag weapons, but honestly does anyone lament the fact that this Joker doesn’t have those? I don’t. This is a redefined Joker for the modern era, and as the comic book feeling of Batman Begins was stripped from this film, the pure, over-the-top comic book elements of the Joker also had to go. I wouldn’t have it any other way.

Once again, I found the hand-to-hand action to be somewhat poorly filmed. It’s definitely improved from what is seen in Batman Begins, but there was still quite a bit that bothered me. They are intense, though, and feature some excellent sound work that amps up every hit. This is most definitely my love of action choreography kind of biting me in the ass, but them’s the breaks. I’m a big Christopher Nolan fan, but I think I found one thing he should never do: make a martial arts film.