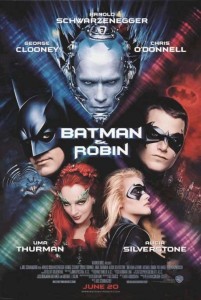 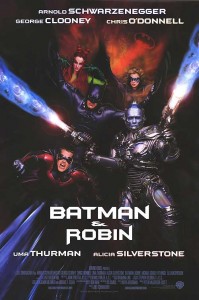 My only real beef with the film is the casting of George Clooney. He’s awful, and there had to have been a better choice out there. My first thought was, of course, Arnold, but the resulting awesome of having Arnold as both Mr. Freeze and Batman would be too much for the world to handle. Not only would the film cause people’s heads to literally explode from the sheer amount of greatness they’d be witnessing, it would also be a film comprised completely of one-liners, and thus dangerously depleting the one-liner reserve fund. Will Smith was on the top of his game in 1997 with the release of Men in Black, and I would love to see a black Batman. Not Will Smith, not at all, but the idea of Will Smith punching Mr. Freeze in the face and saying, “Welcome to Gotham!” would have been worth it. 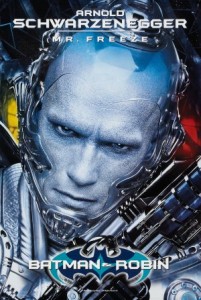 OK, I lied, I have other beefs. The Batmobile is fucking ugly, as are the new costumes (but not nearly as ugly as the new, new costumes that début during the finale of the film). The use of Bane is fucking ridiculous. I remember reading the Knightfall storyline, and I don’t remember much about it, but I’m pretty sure he wasn’t a mindless dope that did whatever someone else told him to. I’d look it up, but I’m gonna hold off until I see the new Nolan film. Batman & Robin also has a million and one characters, with virtually none of them receiving development that creates a compelling storyline. Mr. Freeze’s quest to save his wife is noble, and I always enjoy an evil character blindly obsessing over one good deed so much that he does unspeakable harm to everyone around him, but even that isn’t as emotional or deep as it could be.

Joel Schumacher returns in the director’s chair and he seems a little overwhelmed. His camerawork is a lot lazier and less inventive, even if there’s still a few good sweeping shots that showcase some skill in moving the camera and blocking scenes. Alicia Silverstone’s intro is a great example of this, with the shot following her as she runs through the doors of Wayne Manor and into the arms of Alfred. Schumacher’s Gotham is largely the same as it was in Batman Forever, but this time around the city is much more expansive as a multi-leveled city of the future. I’d say it was a “metropolis,” but then all the DC fanboys would get their tights in a twist. It also brings back the old-timey cars from the Burton era in a very minor way, but I appreciated the blending of visual styles to create a distinct Gotham. The neon is back too, and it looks even more neon than before. I know it bothers a lot of people, but I liked it.

And let’s not forget the fly-ass, slow jam Gotham City by R. Kelly that closes out the credits. Batman & Robin may be shitty, but I loved the shit out of it. Set your sights to fun and roll with it. It’s not a good Batman movie by any stretch, but it delivers the fun consistently to those that appreciate a Batman from comic books before Frank Miller took everything down the path to darkness.

Thanks to Mr. Freeze the interminable heat has been quenched, and the path is open to the world of ICE. Let the festivities begin… tomorrow!