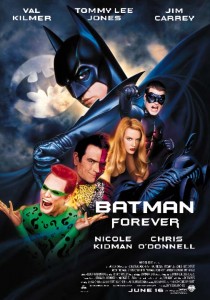 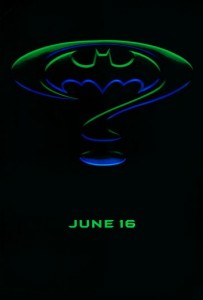 So if you can buy into the style, this movie will never treat you bad. If, however, it immediately pissed you off when Alfred offers Batman a sandwich and Batman responds that he’ll get drive thru, then you’re in for a long ride. This is easily the most divisive Batman film of them all. Mostly I’ve heard nothing but shit about this one since growing up, and the Nolan films coming out haven’t helped its legacy any. There’s no way fans of only Nolan’s work will be satisfied with this film, but it’s not for them. This is the serious, but camp-focused Batman of Burton on overdrive with every exterior blasted with bright neon floodlights and every scene with the Riddler filled with trash one-liners. As a B-Movie fan, none of this bothered me, it actually allowed me to tap into that childhood love I had for it without a problem.

Like Burton’s Batman, this one does not focus too much of its time on boring origins. Batman’s past is further explored via an interesting flashback and emotional breakdown facilitated by Wayne’s relationship with the good doctor Chase Meridian (played by the ever-gorgeous Nicole Kidman). Was this where my love of Kidman began? If not, it’s definitely where it took shape and manifested itself fully formed. Anyway, enough about my origins… Two-Face’s origin is literally a 15-second flashback. Now that’s my kind of comic-film world building! The Riddler’s is a bit longer, but as Jim Carrey is already clearly crazy when we meet him, it doesn’t take him too long to take the full plunge. The meat of the story is how he slowly becomes the Riddler, sliding deeper and deeper into psychosis as he develops the ahead-of-its-time, brain-sucking version of 3D TV (as opposed to the currently available wallet-sucking version). 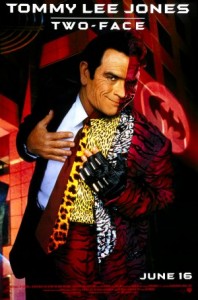 The two villains here feel very similar to Jack Nicholson’s portrayal of the Joker, with Two-Face filling in the wild gang leader wishing to create mayhem half, while Riddler takes up the humor reins. Some might call both performances too over the top, especially Carrey’s, but as they both fit the tone of the film so well, I will not add my voice to that ragged chorus. A lot of shit is also generally thrown at Val Kilmer’s take on Batman, but to this day I can’t see why. I have always thought he did a great job, and I continue to think so. In ways, I feel he’s preferable to Michael Keaton, and I love that the film has enough of a sense of humor to make the first shot of Batman feature a fucking spotlight on his mouth. I remember thinking as a child that Keaton’s mouth looked so perfect as Batman that I worried if another mouth could fill the cowl. Not only do they immediately address my childhood concern, Kilmer’s mouth more that fits the bill by evoking both the strength and the pouty charm that Batman lips demand.

But by far the biggest target of the shit-slingin’ by Internet yahoos is our director, one Joel Schumacher. I won’t lie, I’ve said some horrible things about Schumacher over the years (all before I had a blog, and especially during my film snob years), but I gotta say, his work in Batman Forever is absolutely commendable. Schumacher helped to reinvent Gotham into a neon-fueled, futuristic vision of a modern city that reflects the pages of a comic book incredibly well. Supposedly all those giant faces and statues of Atlas holding up the world were his idea as well, lending the film something of an old school sci-fi feel, yet still retaining the look of the now clichéd neon-infused future; imagine if Fritz Lang’s Metropolis and Blade Runner had a baby. It’s another instance of Gotham City not representing a single, recognizable timeline, but an idealized fantasy of what a city could be if you rebuilt it from the ground up as a mash-up of all your favorite things. Most importantly, Schumacher exhibits a lot of energy behind the camera, injecting intricate camera moves that employ a variety of techniques, from the simple sweeping crane, to the in-your-face fun of a harness-mounted Steadicam.

I’ll give you that Batman Forever is not a film for everyone, but it is a film for me. I don’t give a shit what anyone says, I had a ball watching this. Sure, it’s got that awful scene with Chris O’Donnell doing his laundry to some bullshit 90s rock song (which I’m sure was inspired by this scene from Yuen Biao’s Dreadnaught), but I laughed my ass off at it. It also has a lame Batmobile, but it drove up a wall so that kind of makes up for it. I won’t make excuses for Batman Forever, you either get it or you don’t. I guess you could say the same thing about Batman Returns, but this time around I got it.

And Don “The Dragon” Wilson is in it! Not that you’d notice him, but apparently he was the gang leader with the neon paint on his face. One of these days, man, I’m gonna review the shit out of that Bloodfist series of his.

And next, of course, it’s Batman & Robin! I’ve only seen that one once and I really didn’t care for it, but that was before my love of B-Movies developed fully and I realized how intentionally comedic this series was. And Arnold! I can’t wait!