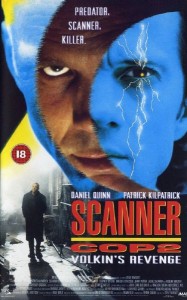 Scanner Cop II is seriously lacking in the plot department, though, with our hero the Scanner Cop (the only character to appear in two Scanners films!) hot on the trail of a scanner recently escaped from a mental institution. This scanner is unique in that he uses his scanning abilities to drain power from less capable scanners, assimilating their strength into his being and becoming that much stronger. Every one of these assimilations is accompanied by an intense scan-a-thon that will have you on the edge of your seat as our villain (played brilliantly by Patrick Kilpatrick) makes tortured scanning faces while his victim is literally sucked dry of their life force. His victims go from living, breathing humans to blackened husks right before our eyes. Scanner Cop II might be a low-budget sequel, but like its predecessor, it pumps much of its budget directly into the FX. This is always to be applauded, and Scanner Cop II is a great find for a physical FX hound like myself.

And when you have someone like John Carl Buechler on FX duty, that money translates directly to awesome visuals on-screen. We’re talking heads swelling, tumors popping out of foreheads spontaneously, fucking ears getting melted off, and, of course, a glorious head explosion. Scanner Cop II keeps you glued to the screen in every one of the aforementioned scanning encounters by building tension to a fever pitch, all the while I’m wondering if this is the scene where the head will explode. There’s many fake-outs contained here, and each one is nail-biting, edge-of-your-seat stuff. When it finally does happen, it is a perfect ending to the scene it’s in, and it definitely does not disappoint. None of the head explosions in the sequels really match the meaty look of the original, but the one in Scanner Cop II perhaps packs the most emotional weight of them all. Not only is it gratifying as a horror/gore fan, it caps off the film’s main storyline nicely. 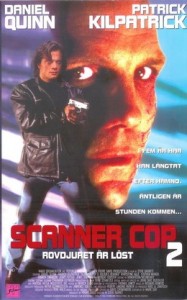 As usual in the Scanners series, the villain is the truly interesting character. Scanner Cop turned that on its head and actually made you care about the hero, but here our beloved Scanner Cop is sidelined a bit to allow the villain to shine. Patrick Kilpatrick is emotive, but only slightly over the top, giving the villain a great, realistic quality. Unfortunately, Scanner Cop (sorry, I forgot his actual name) never dons a patrol uniform during the course of the film, so it’s easy to forget that this is a Scanner Cop movie, which is never a good thing in a film named under the “______ Cop” convention. They explain it away with him getting promoted, but plainclothes Scanner Cop just isn’t the same. It’s the same actor, and he does a good job, but I miss the uniform. Anyway, the drive of the movie is uncovering why the villain is doing the things he’s doing, although you could argue with FX this good, it doesn’t matter why things are being done, only when things will be done.

I don’t have a lot to say about Scanner Cop II other than if you enjoyed the previous films in the series, you will definitely enjoy this one. It’s not as good as Scanner Cop, but it has great FX and it’s nothing but fun for fans. It also features Robert Forster in a very small role as a police captain, proving to me once again that he’s a fantastic unsung actor. This was only two years before his big role in Jackie Brown, and he is clearly bringing a level of talent to the table not generally seen in a lot of B-Movies.