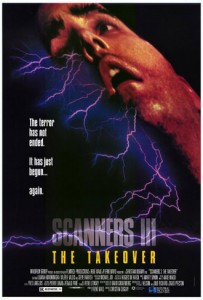 Unfortunately this moment when we should be cranking into a killer training montage goes awry, and we are quickly whisked back to New York City with the very disappointing title card: Two Years Later. I’ll save you some grief and tell you that, yes, the film does end up featuring a very fun telepathic martial arts scene (in addition to a non-telepathic Muay Thai scene), but the entire film does not revolve around it. Damn, missed opportunity for sure. Instead of focusing on the incredulity of that concept, it is merely one feather in Scanners III‘s multi-feathered cap. 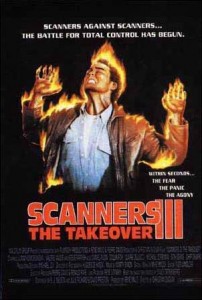 Another greatly disappointing aspect of the film is the missed potential with the rest of the story. Ditching the boring political posturing of Scanners II, this sequel focuses in on a pair of scanner siblings who have taken different paths. Where Alex is remorseful and attempting to control his desires through martial arts and meditation, his sister Helena controls her powers with the new drug EPH-3. It’s a prototype made by their father, but Helena decides that being a human guinea pig is better than listening to the incessant voices in her head one more night. The drug makes her violent and lustful of power, and while it initially lends her the control to gain revenge on a doctor that exploited her in her youth, it quickly spirals out of control for Helena… but not before we get another luscious head explosion.

This scene in particular is incredibly tense and well-edited, ratcheting up the suspense as we watch the doctor’s eyes go white and blood begin to trickle from his pores. We know what’s coming, and director Christian Duguay knows that we know, and he makes us wait it out in the best way possible. The head explosion itself it perhaps the worst yet of the series, but the tension beforehand is second to none. And just for the record, there’s actually two head explosions in this film (a new Scanners record), but the way the second was filmed leaves it in a gray area. Alex and an evil scanner end up underwater in a slow-moving, boring fight very reminiscent of the slow-moving, boring underwater fights of Thunderball. Thankfully the scene here only goes on for a minute or so, if that, as Alex scans the evildoer and blows up his head. The camera quickly cuts above water and all we see is a gigantic explosion of red water, though. It’s fun, and I laughed a lot, but I did feel a bit robbed of a traditional head explosion. See, you give a viewer one head explosion, they’re gonna want another. At least these sequels have the decency to actually deliver on that expectation. A lot of low-budget sequels wouldn’t bother.

I lost track of the story a number of times, but I never worried too much about it. When there’s a high-speed chase on the screen involving a motorcycle and a school bus, you don’t need any explanation, you just enjoy it. Sure, Scanners III is shit, but it’s enjoyable shit and I just can’t get down too hard on a film that marries martial arts and telepathy, even one that does so poorly.