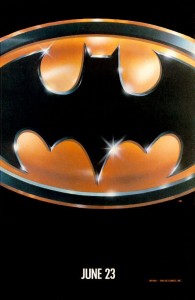 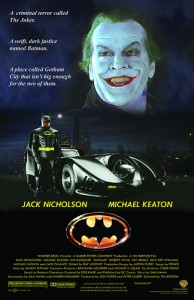 Okay, okay, Batman! Another thing I love about this Batman film is the unclear time period for the film’s setting. The journalists dress as if it’s the ’40s, with typewriters and old fans all around their offices. Vicki Vale’s apartment is pure art deco. The Joker’s got an ’80s boombox with Prince blasting out of it, and the cars look to be a mixture of ’70s and ’80s models. I love films that can successfully pull this off, making you question the design choices while still being engaged with the story, and Batman does it flawlessly. It feels like the idea was to create the mysterious — and fictitious — Gotham City as a melting pot of all times; just as Batman is our realized fantasy, so is the city he resides in. All that praise aside, has anyone else noticed that in this movie just about everything in Gotham City happens outside City Hall or the Monarch Theater? At least they got their money’s worth out of those awesome sets they built!

The cast is an interesting one, and one that you wouldn’t necessarily lean towards initially. Michael Keaton looks like a million bat-bucks in that suit, but as Bruce Wayne he seems a bit aloof for my taste. I love him in the role, but coming at this as an adult, I don’t think I would have ever picked him out of a line-up to play the caped crusader. This leads me to think of other stars from the late ’80s that theoretically could have donned the costume, but I’m at something of a loss to come up with a suitable, plausible replacement. My mind only wants to imagine Sylvester Stallone (envision that gnarled mouth in the suit!), Jean-Claude Van Damme (c’mon, you know you want to see Batman doing the splits between two buildings… and the jump kicks, the amazing jump kicks!) or Arnold Schwarzenegger (just think of all the incredible one-liners this would have sprinkled into pop culture) in the role.

A lot of Batman‘s strength comes from the stunning portrayal of The Joker by Jack Nicholson. As Keaton spends more time as Bruce Wayne than Batman, Nicholson is left to hold up most of the movie with his wild antics and crazy demeanor. He does it with style, creating a haunting and hilarious version of the villain that will forever be remembered even in a post-Dark Knight world. The supporting cast is equally good all around, with Billy Dee Williams criminally underused as Harvey Dent. I wonder if he was supposed to become Two-Face in later installments. I would have loved to see that.

Tim Burton’s Batman is still a wonderful, thrilling superhero film. It’s got a dope Bat-suit, dope Bat-gadgets, the dopest Batmobile, a dope tangentially related Prince album, some incredibly dope models and motion control camera work, and what is probably the dopest and most iconic superhero score of all-time. That fucking Batman theme is too cool for words, and I defy anyone to listen to that shit and not feel like a complete and total badass crime fighter on the heels of another evildoer. 1989’s Batman is definitely still worth your time.