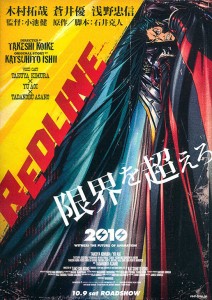 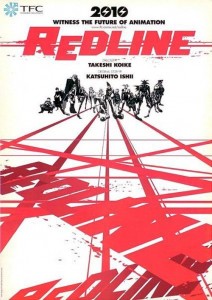 So just what kind of ultradramatic action-packed mayhem is overflowing from this film? It’s all about a sci-fi race called the Redline, where just about anything goes, as long as the vehicles use antiquated engines that keep them on the ground rather than the newfangled hover-cars that have taken over as the primary mode of transportation in the future. It’s a bit like Speed Racer, if Speed Racer took place on alien planets, and most of the time people were shooting missiles at each other. There aren’t any stowaway chimpanzees, but there are some obnoxious bird aliens that try to sell tickets to the main character, “Sweet” JP, for the very race he is going to be in.

JP has earned his nickname by being the only guy on the track that doesn’t bring guns, or some crazy sci-fi contraption, to take out the competition, so he has to be the good guy. He relies on simple skill and going really fast. He also takes his fashion advise from the Fonz to make sure you know he’s a loveable scamp. The nickname of his rival/love interest is never explained though. “Cherry Boy Hunter” Sonoshee is the pretty girl with dreams of winning the Redline, and her determination when they were children inspired a young JP to become a racer, though Sonoshee doesn’t remember him at all.

If you think this is starting to sound sappy and sentimental, I assure you it’s not. This isn’t a melodrama, remember. It’s an extreme drama. An extrama? No, wait, an Xtrama! Does it sound intense enough yet? The relationships are actually handled quite well, without being overwrought or heavy-handed. Nor is his relationship with his mechanic and beast friend Frisbee (and just who the hell came up with these names?) who has fallen into debt with the mafia, and sabotages JP’s car to pay it off. Some people may find the relationships underdone, but I thought they were just about the right depth for this movie. This is an ensemble cast and, like the old Hanna-Barbera Wacky Races, there are a whole group of oddball racers with their own unique and strange vehicles. For the amount of attention it needs to split between the various characters, Redline does a more than fine job of developing the main characters without completely forgetting the minor ones. 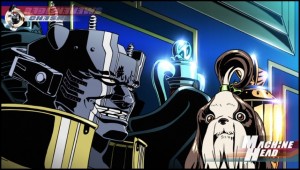 The most important of the minor characters is the five-time champion Machine Head, a giant robotic dude who is awesome enough to get his own theme song and a shih tzu. Because every huge macho guy needs a cuddly little lap dog. He’s the obvious final challenge to winning the race, but the most prominent of the lesser characters would be the flamboyant Super Boins, two buxom music stars. Boin, I am almost certain, is an adaptation of the English word “boing,” clearly referring to the girls’ breasts, which they tend to flaunt. Their “Boincar” even transforms into a giant female robot with the girls’ seats planted, you guessed it, right inside the robot’s boobs. Only in Japan could a film like this ever be made.

So with all the gigadramatic absurdity, you expect a non-stop thrill ride the whole way through, but there are only two races in the entire film. The first is the qualifying Yellowline race in the opening credits. It sounds like a tiny little race, but those are some long opening credits. The grand finale of the Redline itself however takes up at least the last third of the film with all the over-the-top action you can ask for. The race is taking place on Roboworld, and the government has banned it with all the military force it can muster. The Redline organizers are having none of it, though, and the racers are not only fighting each other, but an entire army, including the uncontrollable secret weapon, Funky Boy. (The names! What the fuck is up with these names?!)

So what happens up until that freakish conglomeration of action at the end of the film? Some of it is that characterization I was mentioning before, but most of it is prep work for the race. JP has to get his car rebuilt, but that’s not all that’s going down. The prep work for the race mainly entails the Redline crew breaking down the defenses of Roboworld so they can get the racers to the planet. There’s a good deal of action and trickery as the fans and organizers take on police robots that have little concept of nonlethal force. I know we all came here for some futuristic car racing, but don’t worry, the film squeezes in enough mayhem to keep you in your seat until the real deal goes down in all its gorgeous hand drawn glory.

The posters play this up as the future of animation, but with seven years in production I don’t think too many studios are going to jump on this particular bandwagon. It’s a shame too, as Redline is beautifully animated. I’m not sold on its omnidramatic style, but from a simple technical perspective, this is a joy to watch. It’s hyped up as being completely hand drawn animation like the anime of yesteryear, but that’s not quite true. It’s really only about 99% hand drawn, but that’s still better than 99% of anime made these days. Perhaps the best part of it is the quality to the CG. If it wasn’t for the fact that I know some of those things were completely impossible with handmade animation, I might never have known the difference. The whole movie is animated brilliantly. And if it doesn’t quite reach the same heights as a Ghibli film, it comes awfully close and is still evocative of the good old days when animation felt organic and natural. I only wish it had the softer edge of old animation, too.

So now I have to come to some sort of conclusion about this, and I’m not really sure what to say. The mood is too lighthearted to be taken seriously, but it isn’t funny enough to be a comedy while still being too silly to work as a hard-edged action film. It really tries to blow your mind with its magnidramatic style, but there are far crazier things out there. It’s left in a kind of no man’s land that’s hard to classify. This is one of those times I’m glad I don’t use a rating gauge like Will does. Much of this film is fantastic, especially the animation, but it also has a lot of issues with tone and substance that don’t sit right with me. In the end, when I look back at this film, I have to say I had fun watching it. And that’s what it all comes down to, right?

And I’ve made up my mind. This style will be known forevermore as “hyperdrama,” so everybody get out your dictionaries and pencil it in between “hypercube” and “hyperemia.”