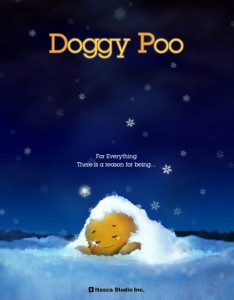 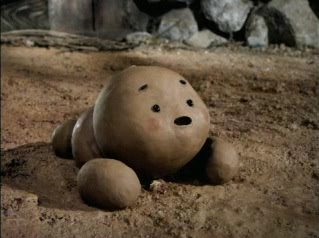 I bet you’re wondering how a movie, even a thirty-minute one, can sustain a plot based around a piece of shit that can’t move. It worked for Bernie in Weekend at Bernie’s, so why can’t it work here? Just get a couple of shoelaces and tie Doggy Poo to your ankles and let the fun begin! We’ll take him everywhere! But that would require friends, something Doggy Poo is clean out of in the opening moments of his life. So what’s a newborn shit to do? Sit on the road and ponder the nature of life and death, of course!

You have to put yourself in his position. He’s born into this world: hot, steaming and alone. He has no knowledge of his surroundings, or of the world in which he now resides. But he does wake up self-aware, so that’s something. Score one for the shit revolution! My shits never did that, but all you Jack Russell owners out there better watch out. Anyway, imagine you were born a piece of shit. That’s gotta be pretty damn depressing, right? And Doggy Poo never had a chance because he’s not a big manly doggy poo from a Rottweiler, he’s only a baby. So he’s at a disadvantage and he’s unable to comprehend this big, scary world. Tough break, but this time it happened to the right guy.

As the film goes on, various characters talk with Doggy Poo and explain their purpose as it relates to the seasonal change and the natural world. This is a kid’s movie, so y’know, they have to learn something. Anyway, all this purpose and reason gets Doggy Poo to thinkin’: what’s his purpose and where is his reason? Yes, this is a piece of dog shit thinking existential thoughts, and I loved it.

Where many depressed individuals (of the human variety) might call themselves worthless, or even a piece of dog shit, Doggy Poo takes the idea and runs with it (or lays in the road with it, as the case may be). But through the final character he meets he realizes that he is not worthless, he has only yet to find his meaning in this great, cruel world. He learns that only by releasing himself from the self-hatred and the depression can he achieve everything he’s meant for. With the touching piano music the message is incredibly sappy, but as someone who deals with this exact issue on a daily basis, it kinda hit home.

The animation is hit or miss, ranging from very good to passable. I loved every minute of it, so I’m not bagging on it, but I think others might have an issue with certain aspects of its production. Not everything was made of the same materials, a touch I really enjoyed, so each thing felt unique and representative of its real-life counterpart. The shit was made of clay, as was the mud, but the birds looked much more solid and preformed. Their only articulation was in their wings and beak, causing them to hop around rather mechanically. If you’ve ever watched a sparrow jump around though, you’ll know that this is spot-on.

I laughed, I cried (OK, I didn’t cry), I enjoyed Doggy Poo a lot. And if you decide to track it down, make sure to stay for the credits where a small child sings the second verse of the end credits song and proves definitively that his special purpose in life is not singing. OK, OK, I feel bad about that one. He is off-key quite a bit, but it’s still cute because it’s a little kid. I expected to laugh and make fun of this one a lot more than I did. Instead, I was won over by its existential message and its quirky visuals. It would take a movie starring a piece of shit to teach me something about myself.