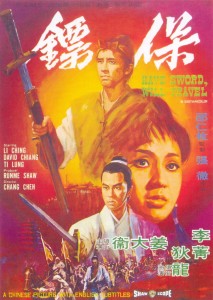 The film opens with Ti Lung and Li Ching laying in a grassy field, subtly flirting with one another and talking about their upcoming nuptials. They plan to wed in the fall, but first they will go to the Invincible Village where Ti will train and hone his sword skills. A group of bandits has other things in mind for them though, but Ti Lung is more than enough to fight them off, all while still nonchalantly continuing his conversation with Li Ching. Yup, he’s pretty badass.

Next we’re introduced to David Chiang’s character, a poor wandering swordsman with nothing much to his name besides his incredible skills and his trusty horse. He too has a run-in with the bandits when he tries to stay the night in the temple they’ve holed up in, and he is promptly turned away (but not before he demonstrates his impressive sword work). The bandits are intrigued with his prowess, but they have bigger things to worry about, such as the huge shipment of silver that will soon be passing their way.

Ti Lung and Li Ching, among others, are to guard this shipment of silver, but don’t get too excited for a rollicking film about caravans getting ambushed by hundreds of hidden bandits. That happens, but it’s the action set piece for the climax of the film, and everything leading up to it is almost entirely devoted to character building and tension. While this might put off fans of later martial arts cinema, this creates a wuxia film that is actually a quality film on all levels and is therefore more accessible to fans outside the genre. As such, I think this would be a great place to dip your toes into the work of Chang Cheh, and the fact that it is readily available in the US via Netflix or Amazon adds to its allure.

As hinted at above, almost all the action is reserved for the finale, but when it lets loose, it’s damn good stuff. This is the second film with action direction by Yuen Cheung-Yan (who shares the credit with the more experienced Tang Chia). Yuen is the brother of the very well-known Yuen Woo-Ping, and later went on to work on a sea of Shaw Brothers films. He also did a lot of action directing on modern classics such as Once Upon a Time in China, Iron Monkey, Tai Chi Master, Fist of Legend, and True Legend. The dude’s no joke, so when I see that this is his second film as action director (and his first at the Shaw Brothers studio) I get excited. While I can’t say that the choreography is far beyond other 1960s offerings, it is definitely one of the high points. The action is fast, furious and full of glorious violence.

Have Sword, Will Travel features slow motion much more than any previous Shaw Brothers film. It’s not to the level of later films such as Sun Chung’s The Avenging Eagle, but you can definitely see the groundwork for it in this film. I’d guess the budget was higher on this film than previous films, because this much slow motion eats up film like crazy. Nearly every moment of intense violence is filmed in slow motion, so all those wonderful blasts of red blood that usually go by incredibly fast during the action scenes play out in glorious detail. It’s never more apparent than in one specific character’s demise, not only because of the blood but because this is a character we care about, and it’s truly heart-wrenching to watch his demise drawn out in slow motion. Not to mention that we are subjected to two specific, bloody scenes involving this character, one imagined and one in reality.

But before that blood-drenched finale, Have Sword, Will Travel is all about its characters and the tension between them. The three leads share an instant chemistry on-screen, but Ti Lung is cautious and believes David Chiang to be an enemy spy. It all comes to a head over the dinner table, when Ti challenges Chiang to a test of martial skill. Ti throws darts with fruits at the end at Chiang’s face, but he easily catches them and nonchalantly eats the fruits. But Ti Lung is still not so impressed, quipping that the true test is the sword. He then promptly throws his chopstick in the air, slices upward with his sword and it comes down onto the table, splitting into two perfect pieces. Chiang refuses to let this alone, quickly doing the same, but his chopstick falls into quarters. The tension between the men is palpable and it’s electric for the viewers. While Ti Lung and David Chiang are engaged in male posturing, their real tension is over the affection of Li Ching, who took an instant liking to Chiang. Chang Cheh is definitely developing as a storyteller, along with Ni Kuang, and the romance between Ti Lung and Li Ching as it morphs into a triangle is very well done and believable.

But really, this is David Chiang’s movie. If Dead End was a Ti Lung showcase, this one is definitely Chiang’s moment to shine. I’ve seen in him in other films, but this one instantly made me a David Chiang fan, big time. He was awesome as the poor, rambling swordsman, infusing every moment with a reserved energy that you know is brimming just under the surface. It’s so gratifying when he lets it out too. Both Ti Lung and David Chiang are much better actors than Jimmy Wang Yu was and sell their martial arts better too. I grew to enjoy Wang Yu over the course of this series, as he was better than the usual male lead in the early Shaw Brothers films, but the step up here is a giant one. Li Ching is marvellous as always, and I’d be remiss if I didn’t mention how badass Ku Feng is as the bandit chief.

It’s such a revelation to see this film in the context of the time it was made, with its two leads emerging as the second wave of martial arts stars, infinitely more interesting than the initial group of stars. As I’ve said in previous reviews, I was never a “Ti Lung/David Chiang as a duo” fan, but I get it now. I totally get it. It took soldiering through all the bad wuxia films to truly appreciate what they brought to the genre, and that is exactly why I embarked on this chronological journey through the Shaw Brothers films. I would have enjoyed this film moderately well if I had randomly seen it, but in the context of the time it was made it is an absolute revelation. During the finale, the themes built up over the course of the film come to beautiful fruition and deliver a stunning, action-packed, heart-wrenching final act. I can’t guarantee your journey will be as revelatory without all the preceding films, but I can’t imagine any martial arts fan not enjoying this one. It’s also fitting that this is the final 1960s Shaw film, and the first to truly display Chang Cheh’s trademark heroic bloodshed in its full glory. A definite must watch for martial arts fans.

Next up in this chronological series of the Shaw Brother’s martial arts films, it’s another from Chang Cheh, and the first of the 1970s, The Wandering Swordsman! But before that there will be a Top 10 of the 1960s list!