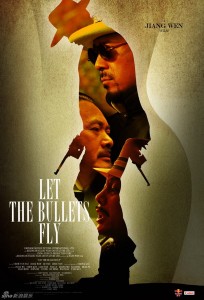 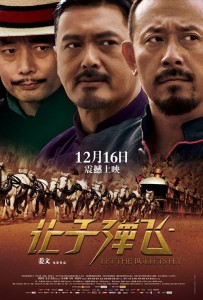 Now I talk a lot about not letting expectations getting the best of you, but even knowing this was a comedy and not an action movie, it took a bit for me to acclimate to Let the Bullets Fly. The editing was too fast, the dialogue was whizzing past me and I was having a hard time enjoying it. Once I settled into its quick pace and its sense of humor, though, I loved it. I think the turning point for me was the scene when one of Zhang’s men is falsely accused of not paying for the jelly he supposedly ate. It’s all a play by Huang to fuck with Zhang, and we know it, so when the righteous man wrongly accused is backed into a metaphorical corner and the only way out he sees is to cut open his own stomach and scoop out the jelly within, we feel his pain. I laughed at the absurdity of it all, and despite the preceding minutes feeling relatively serious, this scene told me definitively that nothing in this film was supposed to be taken seriously.

That being said, there’s a lot of fantastic moments of dialogue that resonate on a number of levels. Most of it is funny, but some is touching or thought-provoking. And sometimes it’s all three. When a character close to the governor dies, he genuinely laments the death and screams out words of confusion and frustration at the event. It’s heart-wrenching, but just moments later in order to fool Huang, Zhang uses the exact same words to comic perfection. It’s brilliant and just one example of how the script deftly transitions between comedy and drama flawlessly. A lot of the dialogue is blasted out like rapid-fire bullets, giving the film something of a His Girl Friday feel where the audience simply sits back in amazement at the witty repartee occurring for their enjoyment.

In order to be able to pull off a multi-genre film, you must have outstanding actors and Let the Bullets Fly has some truly great talent. Jiang Wen is perhaps the most impressive as the bandit leader Zhang, but Ge You is just as fun in a completely different way. I’d imagine that most westerners would be coming to the film as Chow Yun-Fat fans (as I am), and I’m glad to say that this is absolutely one of the best performances of his career. I don’t say that lightly either; he’s just simply fantastic. This is not his standard gun-wielding role, it is a character that allows him to show his ability at being badass and devious, while also playing scenes for laughs. Because so many people are gunning for him, Huang has a double for public functions and this double is also played by Chow Yun-Fat. He nails the feel of another man trying to play him perfectly. The double is always smirking, with oddly slicked hair and a completely different look in his eyes. The double isn’t in the film much, but he brightens up every scene he’s in.

Any foreign comedy is going to have its share of translation problems, and your love of Asian cinema will dictate how much you “get” Let the Bullets Fly. Where the stomach-cutting scene reminded me of the absurdity of Chinese humor, I think a lot of people unaccustomed to this would be turned off immediately. Gore in comedies is something that rarely gets play in Western culture, unfortunately. Troma films have always walked that line, as have a lot of horror comedies, but those are usually gunning for a horror/gore-friendly audience so it’s more easily accepted. I’d have to point to James Gunn’s Super as being one of the few examples of gore in a non-horror movie that also successfully manages to be funny and capable of many different tones (sometimes all at once). I’m sure this is the influence of Asian cinema on Gunn coming through.

As for the action that is here, it’s fun but never anything that seeks to be the highpoint of the film. There’s a standout sequence towards the end of the film where the bandits are assaulted in the forest by Huang’s men dressed as bandits, but other than that it’s mostly just dialogue and cat-and-mouse games. It works beautifully for this film, but I just can’t stress enough how much you have to temper those action expectations you have about Chow Yun-Fat starring in a film called Let the Bullets Fly. The title is definitely misleading, but after watching the film and seeing where it comes from, it’s an apt title for the thematic content of the film.

Let the Bullets Fly is a great multi-genre film that remains funny throughout and intensely watchable. It does feature some rather obvious uses of poor Chinese CG, but these moments work better than they should because of the comedic, absurd tone to a lot of the scenes. The character dynamics between Jiang Wen, Chow Yun-Fat and Ge You are outstanding, and this is a real winner of a script. Let the Bullets Fly is the highest grossing film in Chinese history, and while this is no barometer of quality, it is a damn fine film. And you’ll never see a better example of wire-work aided air-juggling of a person in a movie, something that I thought I’d only see in the heated battles of Marvel vs. Capcom at the local arcade.