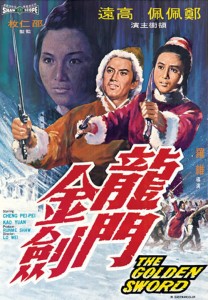 In terms of the fights, The Golden Sword has a lot to offer. It’s far from wall-to-wall action, or the brotherly bloodletting of Chang Cheh, but what’s here is pretty well choreographed and filled with a budding sense of Hong Kong fantasy. A fight in a teahouse or inn is in virtually every wuxia film after Come Drink with Me, but the one here features Kao Yuen catching an attacker’s sword with his chopsticks, and Cheng Pei-Pei battling evildoers named The Three Cripples and defeating them violently within ten moves. This is easily the best sequence in the film, so it’s a shame it comes so early on, but I suppose it’s a testament to my involvement in the story that I only realized this afterwards. There’s also some unarmed fighting that’s very basic, but still well-choreographed and indicative of things to come in the genre. Perhaps the fact that this was Sammo Hung’s first film as a co-action director had something to do with this? While I’m talking about Sammo Hung, he’s also visible as one of the bandit guards that attacks Cheng Pei Pei in the beggar camp (see the photo below).

And speaking of the beggar camp, The Golden Sword is the first Shaw Brothers martial arts film in a long time to have a musical number. And I didn’t scoff in disgust at it! In fact, it was pretty good, featuring Cheng Pei Pei and the beggars doing synchronized dance and singing such wonderful, life-altering lines as, “You will be a dummy if you don’t get drunk/Who wants to be a dummy.” I’m sure the translation takes some of the flow out of the lyrics, but the sentiment and fun is obviously still there. The song also features lots of overhead shots of the dancing, subtly reminding me of Busby Berkeley’s iconic work of the 1930s.

The first half of the film spends a lot of time in a snowy setting, and while this adds to the exotic allure of the film it completely betrays the studio sets numerous times. I’m always willing to look past this, and I hate to draw attention to it as I would prefer to focus on the strengths of the Shaw Brothers studio without harping on their faults from my seat in the future, but some of these instances are ridiculous and come off as lazy. In a few shots you can see what is clearly a painted-over stage door, and in the most egregious shot Lo Wei shows the entire beggar camp in a wide shot from above which allows the audience to see the studio wall and the shadows from the houses casting themselves onto the wall painted to look like the sky. In both cases, showing these faults could be easily avoided by taking a different angle, so I’m at a loss to understand why they were shot the way they were. In any case, these are very minor moments that pass quickly and shouldn’t get in the way of any wuxia fan’s enjoyment of the film.

While a lot of the 60s Shaw Brothers films have a very similar look and feel, Lo Wei’s genre entries are always unique and stand apart from the crowd. Most of the films use the same sets, but Lo Wei always finds new and fresh ways to shoot them so that it’s not immediately apparent. The Golden Sword is his best example of this I’ve seen thus far, and I look forward to his further work with the studio to continue the trend. The action and fight quotient might be a bit low, but the fantastic storyline more than makes up for this fact. The Golden Sword is a great wuxia tale, filled with all kinds of deep-seeded emotions, revenge and secret dealings, and I loved it.