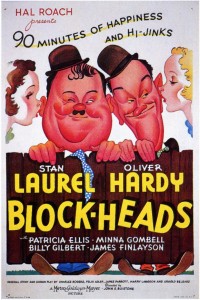 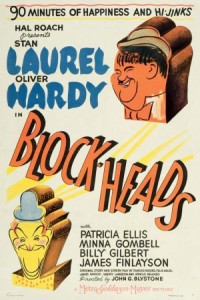 Block-Heads is also interesting because the two comedians aren’t presented as the usual team of traveling, single men. Here, Ollie has made a life for himself while they were apart, marrying and apparently getting along just fine. He does have a slight altercation with the neighbor’s returning husband to shows us that he’s still a block-head, but perhaps this is a rare moment nowadays as twenty years have passed since his wild, wayfaring days with Stan. Ollie was always weak in the face of a beautiful woman anyway.

When Stan is introduced back into his life, it becomes sheer chaos and lunacy. Stan was always portrayed as the dumber of the two, but here it’s seemingly taken to new heights. Coupled with the way the story is structured, the audience is meant to feel sorry for Ollie’s ruined life by the appearance of Stan “from the grave”, but at the same time we’re all fans and really very excited to see them together again. It makes for a lot of conflicted feelings. Perhaps this is Laurel and Hardy’s subtle take on a soldier unable to adjust to civilian life, which Stan obviously cannot. After eating canned beans for twenty years and Ollie offers him a juicy steak, Stan’s first question is if they have beans. Old habits die hard.

While Stan is the main purveyor of the stupid here, Ollie definitely has his moments of stupidity too, and these make for some of the film’s funniest moments. I especially like when Ollie thinks Stan has lost a leg in the war and he carries him to the car, losing his hat on the ground and then trying to pick it up while still carrying Stan. The fight he has with James Finlayson is also a standout moment. 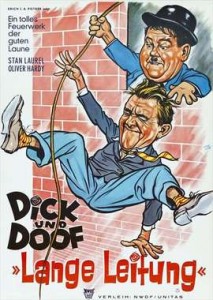 Stan’s ability to perform supernatural feats was always something I loved in my youth, and it still manages to entertain all these years later. In Way Out West, he used his thumb as a lighter to great effect, but here they one-up that gag by having Stan use his hand as a pipe. There’s also a moment when he needs a match which won’t light and he looks questioningly at his thumb like, “Hey, maybe I could… Naw, that won’t work”, and it makes for an enjoyable small moment for fans of the duo.

Block-Heads was directed by veteran John G. Blystone, who also co-directed Buster Keaton’s wonderful Our Hospitality, as well as a whole mess of Tom Mix films, among others. He died at the young age of 45 in 1938 though, so his final two films were the Laurel and Hardy features Block-Heads and Swiss Miss. His eye for visual gags and expertly placing the camera to capture the action is superb. There’s quite a few gags around the boys going up and down flights of stairs, and Blystone makes the most of the multi-story set, shooting it at many different angles and distances to give the appearance that it’s larger than it is. He began his career as a director in 1915, and it’s a shame he died so young.

Block-Heads isn’t the greatest Laurel and Hardy film, but it is very funny from start to finish. I’m sure big fans are already familiar with its routines and jokes, but I think newcomers would get a kick out of it as well. A different film might be a better entry point, but this one packs in a ton of great jokes into a compact fifty-seven minute runtime. You can’t beat that.

And remember, never underestimate the power of a football to the face to bring the laughs.

Couldn’t find a trailer, but here’s James Finlayson’s scene in the movie.