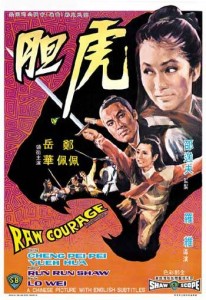 Our heroes are rather charismatic though, which makes up for the villains lack of definition. Cheng Pei-Pei has had much better and meatier roles, but she’s clearly having fun swinging that sword around in her attempts to protect the child from the clutches of evil. This is the first film I’ve seen Ng Fung in—this looks to be his only martial arts film—and he does surprisingly well for a newcomer. There’s a noticeable lack of close-ups of him during the fights, so perhaps a stunt double did all of his fighting, but he (or the double) performs well and is a great counterpart to Cheng Pei-Pei. The film really gets interesting when these two meet up with Yueh Hua, the actor with the effervescent smile that lights up every film he’s in. Yueh plays a goat farmer who helps the heroic duo, before getting drawn into their story and the duo becomes a heroic trio.

Speaking of The Heroic Trio, Raw Courage‘s plot also features a eunuch, but much to my chagrin he is only mentioned a couple of times and never shown on-screen. I’m going to just imagine that Old Monster and the eunuch are one in the same (even though I know they’re not), and call it a day. Old Monster is similar to later film eunuchs in that he’s more powerful than everyone else and he’s somewhat supernatural, so it works for me. But for those that have seen The Heroic Trio, don’t get all excited thinking that Old Monster is anywhere close to the eunuch featured in that film. They’re about as far as two eunuchs can get from each other, and let me tell you from experience, that’s pretty far.

As for the fights, there aren’t many, and what’s here is mostly three-vs.-many battles, but they are much more fun than you’d expect from large-scale assaults. Lo Wei’s camera isn’t nearly as exciting or dynamic as Chang Cheh’s, but he captures the action well and with a lot of energy. The fight towards the middle of the film when they break out of a doctor’s office is especially fun, even if it does feature a lot of undercranking to speed up the motion. One of the other later battles pits our trio against a sea of white-clad enemies. Where’s Chang Cheh when you need him? I’d love to tell you that our heroes sliced and diced their way through each and every one of these baddies in gruesome, tomato-juice spilling ways, but it just ain’t the case. Most of the deaths are completely bloodless, and therefore very unrealistic. I do have to give Lo Wei credit for slowly ramping up the level of bloody violence though, and in the final scene there’s quite a bit of swords through people and bursting blood-filled condoms.

Raw Courage is nothing more than a standard wuxia film, but it’s one that’s very well done and entertaining. The storyline and the settings are different enough to intrigue stalwart genre fans, reminding me a lot of a lighthearted 50s Western before everything turned dark and gritty, which is fairly true of the kung fu genre as well. The film ends on something of a possible sequel note, without any real resolution, but don’t bother searching for it because it doesn’t exist. This is all you get, and for what it is, it’s pretty fun.

Next up in this chronological jaunt through the Shaw Brothers Martial Arts catalog is The Swordmates, from directors Chang Ying & Pan Fan. Let’s hope for a good one.