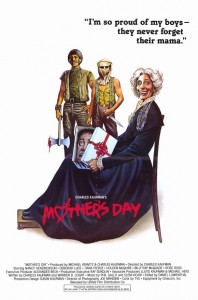 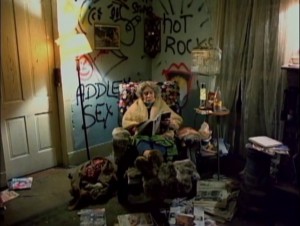 What sets Mother’s Day apart from countless other backwoods shitty horror movies is its ability to make us care about the characters. Ample time is used to setup the girls, allowing the viewer to make a connection with each one before they enter into the countrified madness the latter half of the film contains. One of the greatest moments of character depth comes when we see a flashback to the girl’s college days and they decide to play a prank on the asshole boyfriend of Jackie, a dude who calls himself “The Dobber”. She lures him into the middle of the college stadium and then, after he’s completely nude, her friends hit the lights and humiliate him over the loudspeaker. Great stuff, and it sets up the three girls as long-standing friends very well, so when they get attacked, it’s shocking and hard to watch. You feel for these girls who, while stupid for going out into the woods, are endearing despite completely fucking up a small town general store on the way there and sliding themselves into the asshole city-folk stereotype so often scene in rural-set horror films. Not that that gives the locals any right to tie them into their sleeping bags and rape them; I’m just merely making an observation.

In addition to all the moments of sheer terror and sadistic depravity, there’s a lot of comedy here as well. Not really the film I’d expect to be played for laughs, but it’s done very darkly and subtly here and it works perfectly. One of the most twisted of these moments is when Mother and her boys force the girls to participate in short plays for Mother’s entertainment, but these plays end with violence or rape. It’s hard to describe how dark moments like this could elicit some humor, but the villains are just corny enough to do it. It’s important to note that this was the intention of Kaufman, so I think it’s fair to say he succeeded. 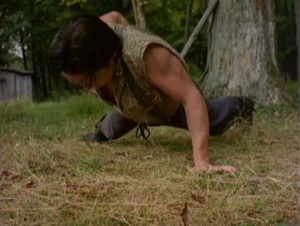 But my favorite comedic moment is when the boys exercise and hone their skills. This is filmed as a sadistic training montage with a kick-ass synth track bumpin’ the soundtrack all the while. The two brothers throw down their best slices and dices on hanging burlap sacks, baby dolls and cantaloupes with faces drawn on them. It’s fun as shit to watch, but then you remember that these are the same assholes that kidnapped and raped the characters you’ve previously connected and identified with. It’s a fantastic scene, filled with twisted tension, and this duality is another fine example of why Mother’s Day stands out from the crowd.

The acting is also very well done from the entire cast. Beatrice Pons (as Rose Ross) plays the Mother to comic perfection, gaining our trust in the opening moments, and making us cringe during the rest of the film. I guess those self-help classes really do work! She’s empowered to do anything her blessed heart desires! My favorite girl was the bookish Abbey played by Nancy Hendrickson. There’s such a great undercurrent of anger and loneliness running through her character, I couldn’t help but instantly connect with her. This was her only acting gig, so thankfully she did a great job. I always feel bad for the ones that do poorly in their only role.

Mother’s Day has absolutely nothing to do with the holiday it’s cleverly named for, but that’s completely beside the point. This is a fantastic piece of 80s horror and I’m sad I waited this long to finally check it out. It has a gnarly decapitation within the opening minutes (also the film’s biggest gore moment, so set those expectations accordingly), and it features a great, thrilling climax complete with a ridiculously fun, freeze-frame ending. Oh, and I love the character of Queenie. You’ll just have to watch it.