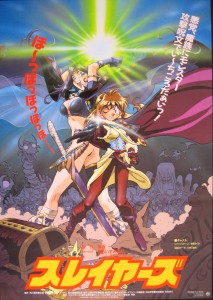 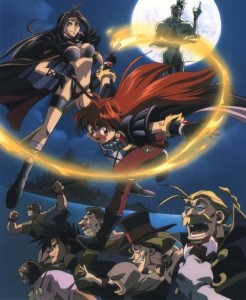 Lina plays the role of the straight man, though she has quirks of her own. She is, despite being short and scrawny, quite gluttonous, and she’s overly concerned about her breast size, a weakness that Naga, who is tall and voluptuous, exploits whenever she gets the chance. Naga is haughty and condescending with a perception of the world that can really only be described through example, such as when she creates a stone monster with a head the size of a house atop a body roughly the size of a person. The poor misshapen thing soon topples over and crushes everything beneath it. It goes on a “rampage” destroying half the town in a futile quest to simply stand upright. The film is full of memorably absurd moments that surprise and amuse. I was never falling out of my chair with laughter, but the humor works well and kept me engaged with the film, and it has the best reaction to a zombie assault I have ever seen.

As with the rest of the series, this movie is a parody of Tolkienesque fantasy with elves and monsters and wizards galore. Its plot mostly revolves around the sinister machinations of what appears to be Kermit the Frog’s fat redneck cousin and a mysterious voice that invades Lina’s dreams, telling her an ancient love story which becomes important to the plot.

It takes a turn for the serious at the end of the film, and it does so with a surprising fluidity. Without paying attention, you might find yourself in the middle of genuine drama and wonder just how the hell it happened. It occurs in a scene when Lina begins chanting her ultimate spell of supreme badassness, Dragon Slave. It drags out the moment for a good minute or so, and attentive viewers might question why, especially anyone who has seen the series and knows that Lina can pop that spell off at the drop of a hat if she wants to. But that scene subtly alters the tone of the film, slipping the audience into a less frivolous mood. From then on the film is straightforward action, and it might be a while before you say to yourself, “Hey, when was the last time they told a joke?”

This serious part of the film isn’t as grand or impressive as it wants to be, but it gets the job done. The pacing during this section feels a bit jerky at times but, again, it gets the job done, neither inducing boredom, nor causing too much confusion. A bigger concern is Lina’s shift from opportunistic mercenary to determined hero. It’s sudden, and gives the end of the film a cheezy feel that’s a bit disappointing. The two different modes of the movie clash with each other, but at the end it tries to fix things. With a several second shot of Lina’s resigned smile it reconciles the conflicting nature of both the film and Lina’s character. It’s a subtle and impressive moment that is easily overlooked, and it mostly works. Mostly. It doesn’t completely dispel the awkward feel of that last part, but it’s enough that I’m willing to let it slide. Others may not be as forgiving, though.

The ending can come across rather sappy, but it still has more than its fair share of good laughs. And really, who cares if the plot is a little hokey. It’s a fun ride, and that’s all it was ever meant to be. Just kick back looking for a good time, and it will deliver.

[Editor’s note: The trailer has embedding disabled, but you can watch it on Youtube.]