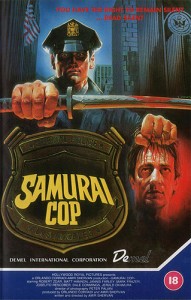 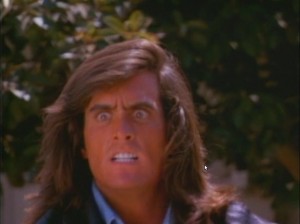 Director Amir Shervan is truly awful—I mean, AWESOME. Everything is so poorly put together; many scenes are like a random series of shots from angles that make no sense, all tied together with some of the most hilarious sound work I’ve seen in a film yet. Sometimes the dubbing matches, sometimes it doesn’t, but you shouldn’t care because it’s all hysterical. The writing is also of note with wonderful exchanges like:

But the crowning achievement in writing goes to the scene in which Samurai tells the Japanese gangster to his face exactly what he thinks of him. It’s one of the most enjoyable scenes I’ve seen since the endlessly entertaining “Oh my God!!!!!” from Troll 2. Daniel Day-Lewis may have won the Best Actor Oscar that year for his work in My Left Foot, but clearly it was a case of the Oscar voters just not seeing Matt Hannon’s tour de force performance in Samurai Cop. I could watch this clip on repeat all day long and still laugh at it, and in fact I’ve already watched it a few times just over the course of writing this paragraph. 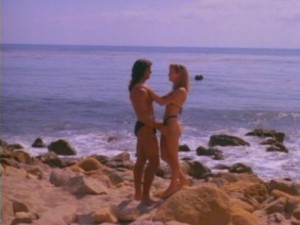 All of these wonderful moments of classic dialogue and reckless police action are counterpointed with multiple softcore sex scenes. See, in addition to slamming the bad guys in the face with his fists, Samurai has a softer side that involves successfully hitting on every woman he comes in contact with. He’s the true definition of the idealized male, with all the bullshit, needless characterisations of a traditional Hollywood film removed. Samurai Cop is the action movie distilled down to its root elements and then refined back into one of the most enjoyable entertainment packages of all time. 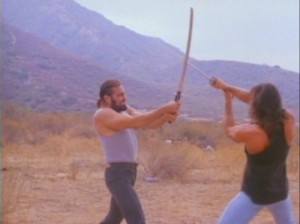 Unfortunately, our samurai cop is never outfitted as a samurai during the film’s runtime. I didn’t necessarily expect that, but I was silently hoping that in the final scene he’d don a traditional outfit and lay waste to the gangster scum. Instead of this scene in my mind, I did get one amazing and stunning fight between Samurai and Robert Z’Dar. It’s sped up ridiculously, and all it’s missing is some Yakety Sax, but it’s probably the most fun I’ve had watching a shitty fight ever. The two muscled behemoths face off as if their lives—and their careers—depended on it. This is a homoerotic man-dance for the ages.

There are some that would instantly write a movie like this off and call it worthless, but that is completely missing the point. Samurai Cop is designed to entertain and it succeeds so completely at that goal that any insults hurled at it are null and void. I can’t really ask for more from a low-budget, late 80s action film; this is Grade-A shit designed purely for your enjoyment. It’s a hoot and any self-respecting B-Movie lover would be doing themselves a supreme favor by watching this one. 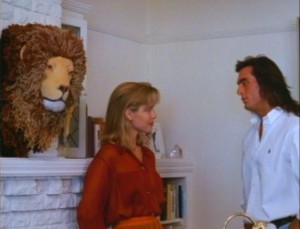 Amir Shervan only has one other movie that’s readily available, 1987’s Hollywood Cop, and I for one cannot fucking wait to check it out. I mean, look at this fucking poster for it! It looks incredible! He also has three lost films that sound like pure masterpieces and hopefully one day we’ll get the Criterion Eclipse box set these films deserve.

I’ll leave you with one more quote from this gem:

“Officers! If you have anything against me, then book me! Otherwise, as they say, get the hell out of my face!”

This isn’t an official trailer, but it’s the best I could find and does a great job of summing up the film.