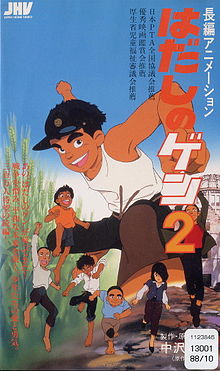 Without the overwhelming presence of the bomb, the film loses the hard-hitting force that made the first Barefoot Gen so gripping, and it has a much lighter tone which some might feel makes it weaker than the first. The film still has the same theme of finding joy amidst hardship and suffering, so it can come across as redundant to the original as well. But where the first film was more bitter than sweet, Barefoot Gen 2 finds a more even balance, which allows that central theme to come through clearer.

The bomb also provided a central event to focus on, and I spent much of the sequel wondering just what this story was about. It wasn’t until the end of the film that I could look back and realize that the central aspect of the story is Gen’s mother. It is her slowly fading health that the story truly revolves around; it just has a tendency to get lost amidst the other events happening in Gen’s life.

Throughout the film Gen encounters a group of orphaned children who also survived the bomb, and while their initial encounters are antagonistic, they eventually become friends. Much of the plot revolves around the two groups helping each other to survive. They even wind up building a house together. It’s quite strange with our modern sensibilities to think of a group of children, whose oldest members are in their early teens, industrious enough to build a house, no matter how basic. It’s one of the happiest parts of the movie, but it is also another moment tinged with sadness. They are, after all, forced to build the house out of scrap gathered from the ruins of the bombed-out city.

That tragedy is always lurking under the surface, and the mass grave late in the film is a perfect example. Even three years after the war, there are still countless dead left unburied, and the American soldiers are using bulldozers to fill a gigantic pit with endless mountains of skeletons. This is a much happier film than you would expect, but that happiness is a deliberate attempt to banish the sadness as Gen refuses to give in to despair.

This is far less of a tragedy than the first film, and because of that it doesn’t have the same shocking impact. But as much as that limits the story, it also opens up new directions for it. Aimless plot aside, as long as you can accept that it is a different story from the original, it is still a wonderful film with endearing characters, and a great perspective on postwar Japan. And if seeing the apocalyptic nightmare of the first film is more than you want to subject yourself to, the second can offer you a less depressing alternative.

[Editor’s note: Couldn’t find a trailer, but here’s the first ten minutes for as long as it lasts.]