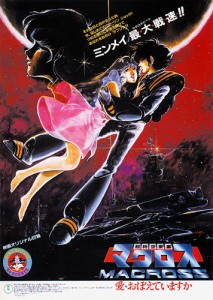 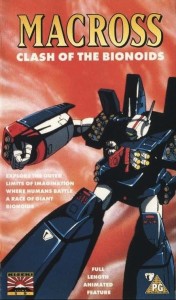 So, while I’ve been blithering about the oddities of publication, you’ve probably been wondering just why the hell a movie about giant robots fighting aliens in space has the title “Do You Remember Love?” The answer is that this is Macross. This is the story of how an ordinary love song saves the human race from extinction. For all its dogfights, swarms of missiles, and huge spaceships, Macross has always, at its heart, been a love story. And while the final climax does have main man Hikaru bust into the room in his giant robot bristling with guns and missiles, he doesn’t do something as boring as crash through a door. No, he flies through a holographic image of leading lady Minmay while she sings “I love you so!”

It’s not often that you see a ferocious battle played out to a gentle love song, and you might expect the two tones to clash, but nothing could be further from the truth. The song becomes an excellent counterpoint to the death and destruction, making that final battle more tragic than exciting, more desperate than triumphant, and it underscores the entire purpose of the story. The simple use of that love song makes the end of the movie more tense and emotional than any fast and hectic tune could have ever done. 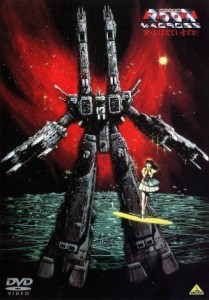 If you think this all seems a little melodramatic, well, frankly you’d be right. It is a rather melodramatic concept, but it is also partly because the film is a summary of the events from the TV series. It takes the most climactic and emotional moments of the series and distills them into one movie, intensifying the drama. And it does a superb job of it, breaking the epic tale down to its bare essentials while still retaining a surprising coherence. Kawamori and Ishiguro realized that trying to explain the situation would only be a boring information dump for newcomers, and simply redundant for fans. Besides, how much more explanation do you need than “alien invasion.” Because all the complicated stuff was left out, every scene gets the time it needs to do its job, and you never feel that they were trying to cram in as much as possible at the cost of good pacing.

The romantic moments are savored, perhaps more so than the action scenes, drawing them out so the relationships feel developed and believable. Despite being a good thing, this may be the biggest problem with the film. Action fans will likely find themselves bored by the slow romantic parts, while romance fans will be just as bored during the action sequences. And there are some damn cool action scenes. How many films have a shootout in a pitch dark airlock, lit only by the muzzle flash of the guns? To truly enjoy the film you will need to appreciate both the romance and the combat. 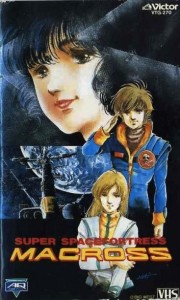 While the plot is focused evenly, the animation is a mixed bag, although on average it is very good, especially for the time period. 1984 was the same year that Nausicaa debuted, soon spawning Studio Ghibli and forever raising the bar on how good an anime could look. It would be silly to expect such great animation from Macross, but there are some moments of just plain lazy animation that give it a B-movie feel at times. However, it also has scattered nuggets of animation gold that even Ghibli would have been proud of, and even at its worst the animation isn’t terrible. Mostly the characters themselves have lower quality animation, while the action sequences get the main focus. This may have something to do with director Shoji Kawamori, who is no stranger to Macross. He was the mechanical designer for the original series, and most, if not all, of its giant robots and alien spaceships were made by him. Perhaps he had a bit of bias for his own creations, and gave them more of the animation budget.

With great moments of animation and an accessible plot for the unfamiliar, fans of space opera should search this one out, as there has rarely been a film that embodies the term so well. Others may not find it as interesting though, and it remains primarily a treat for fans of the original, capturing the most heartwarming, and heartrending, moments of the series with flare and beauty. It’s a great watch for anyone that fondly remembers Robotech, and anyone that likes epic space warfare will also find a lot to love.

2 thoughts on “Stephen reviews: The Super Dimension Fortress Macross: Do You Remember Love? (1984)”