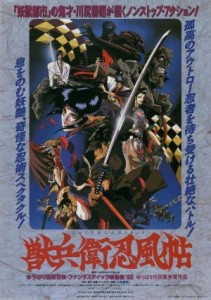 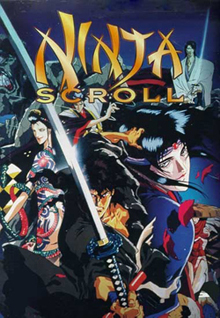 Kagero has much in common with another female ninja, Oyuki from The Dagger of Kamui. Both in appearance and personality they are much the same, both even throw flower petals from their sleeves that confuse and distract their opponents. There are actually a lot of similarities between the two films. Both deal with shadowy rebellions that threaten to erupt in civil war, and both have a search for stolen gold. Quite a few plot twists parallel between the two films, but this is more to do with both of them paying homage to the ninja action genre in general, rather than being a blatant copy. Ninja Scroll also features other common samurai story elements not in Kamui, such as the blind swordsman, who’s preternatural hearing makes him better than anyone else, or the opening scene, where Jubei has a showdown while crossing a bridge.

As many similarities as there are with Kamui, the two films have a vastly different style and approach, especially to the combat. While Kamui relies upon imagery and implication for its action scenes, Ninja Scroll is direct and brutal, but always inventive. Every character gets taken out by some clever bit of ingenuity. The fantastical nature of the character’s abilities prevents simple straightforward battles, and some new trick is always necessary take out the villains. The movie mostly focuses on these decisive moments rather than a trade of blows between opponents; any normal combat situations are handled swiftly in order to move on to the next bit of trickery. For instance, at the end of the movie, Jubei must take on a horde of ninjas bounding over the rooftops. But rather than showing us that fight, the scene shifts to the villains plotting their next move amidst the piles of ninjas freshly killed by Jubei, while the clanging and slicing of his continuing battle echoes across the town.

Ninja Scroll is far more of an action film than a drama, and rushes from fight to fight with little time for character development. It doesn’t neglect its characters, though. Their feelings are usually written on their faces during moments between battles. This is truest for Kagero, who copes with her abuses quietly and in private, rather than with words. Even the villains, who have little individual screen time, often have motives and ambitions that set up rivalries among themselves.

Now, any good ninja movie ought to have some skullduggery going on. It’s what ninjas do. And we’ve got plenty of it here. In fact, the last act of the film has as many betrayals as it does action sequences, and the backstabbing doesn’t stop until the credits start. And all of it is managed without being confusing. To an extent at least. To Japanese audiences, it was probably quite easy to follow, but the flurry of Japanese names bounding around was enough to make it hard even for me to tell which team was which, and I’m used to having a lot of Japanese names bouncing around. As long as you can keep track of what the different factions are called, you will have a very twisty plot that remains very navigable. Every turn is foreshadowed and well set up. When one comes along, it feels natural and inevitable. My only problem here is entirely my own. I saw this film years ago, and now that I have matured and gained a finer appreciation of its subtleties, I unfortunately remembered all the plot twists. Coming to this film unaware would have been a treat.

Despite my foreknowledge of the events, I found myself eagerly looking forward to them, and I never tired of the situations or the battle scenes, no matter how much I knew what was coming. Ninja action fans should definitely pick this one up, and I highly recommend martial arts fans of any kind to give it a try, if for no other reason than to see a Japanese fantasy take on the genre.