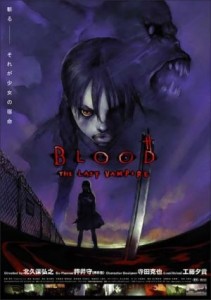 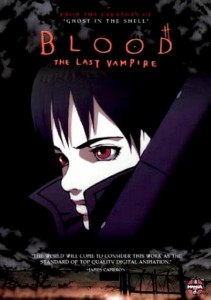 There’s not much plot, but at a meager 48 minute runtime there isn’t much room for one. Set just before the Vietnam War, we are quickly introduced to Saya, a takes-no-shit young woman who is the last remaining “original.” Some shady government types are sending her to a US Air Force base in Japan where some things called chiropterans have been found, and it’s up to Saya to hunt them down. There’s not much more that happens, although an overly curious school nurse gets mixed up in it.

The film goes through the paces of traditional horror fare, trying to put its own twist on genre conventions, like the duck, duck, goose nature of alternating real attacks with more benign people suddenly walking around a corner. Much of the movie, though, has Saya in ferocious combat with the monsters, so fans of suspenseful horror will probably be disappointed as the film has very little time to spend on building tension. But it even tries to cover that base, too, with one scene of the school nurse following a trail of blood into the crowded dance hall of a Halloween party. What we get is a horror movie dressed up as an action film, with Saya charging headlong into battle, sword in hand, leaving the school nurse to play the more traditional horror movie protagonist. It sometimes veers toward the clichéd, but Blood has enough clever tricks up its sleeve to keep it from getting too generic.

In a noble effort at realism, the movie has a splicing of English and Japanese voiceover work, representing both cultures living side by side. Considering many of the actors are working in both languages, they did an admirable job presenting both languages simultaneously. As might be expected though, the English acting often felt very stiff and awkward with many of the actors working outside their first language.

The film has pretty nice production quality, but is unfortunately marred by excessive use of CG backgrounds and objects. This is a crying shame, because when it uses more traditional hand drawn environments it looks gorgeous, with lots of detail capturing both the setting and the mood nicely. To be fair, it makes a decent effort at blending the CG with the 2D animation, though with mixed levels of success. Some moments work amazingly well (like the fantastic lighting effects), while others look flagrantly ugly (like just about anything from the opening subway scene).

As a prequel to the Blood+ series, it doesn’t add much, and in fact defies some of the rules for chiropteran slaying set out in the series. Clearly, many of the finer points were worked out after the film’s release. It can technically be placed into the series’s timeline, but it’s something more of an alternate universe.

It really would have been a good, solid action/horror hybrid if it weren’t for the distracting CG. Anyone who can tolerate that will certainly find a good adventure crammed with all the creepy lighting, giant misshapen monsters, and copious amounts of blood necessary to keep a horror fan happy for its short duration.