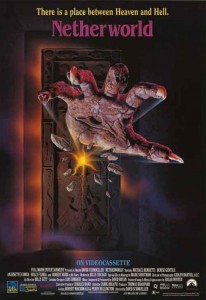 The problem, at least for me, lies in the film’s wasted potential. Let me repeat it again: Manbirds. How the fuck do you let that shit out of the cage and not run with it? This is the low-budget horror realm, where the freedom to do literally anything is at your fingertips. This is unfortunately one of the major issues I seem to have with Full Moon’s films: they take themselves much too seriously and they’re seemingly too afraid to commit to the truly wild shit. On a more serious note, the film’s storyline (besides the failed manbirds) isn’t bad, with the main character’s father asking him to resurrect him from the dead via a letter written just prior to his death. A good movie could have easily come from the makings we have here, but instead I only got one hazy shot of a manbird and a couple of good moments with the flying stone hand. Not that those moments are anything to marginalize. They’re worth the price of admission as far as I’m concerned (One manbird is better than no manbird. – Old Chinese Proverb), but the wasted potential of a whole movie filled with them is just too much for my weak heart to bear.

In closing, I’d like to recommend a better piece of fiction that Netherworld reminded me of. It’s called Gabriel Knight: Sins of the Father, and it’s a PC adventure game from 1993. It’s also set in New Orleans and works along the voodoo/cultist storyline, but where Netherworld fails to deliver a compelling story, Gabriel Knight tells one of the best stories that I can ever remember experiencing in a game. The fully FMV sequel is also damn good too, but I’ve already gone off track far too much. Anyway, Netherworld does have its good points, but it’s much too boring to be something worth recommending to anyone other than the most valiant of Full Moon fans.

Next week in I”ll be checking out a Blair Witch rip-off movie from Subspecies directer Ted Nicolaou, 2000’s The St. Francisville Experiment!