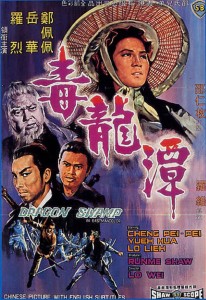 With a title like Dragon Swamp, it feels like a film that will deliver some fantasy elements. This is no The Monkey Goes West, but Lo Wei definitely takes inspiration from the films of Ho Meng-Hua in crafting Dragon Swamp. It’s like an amalgamation of all the Shaw Brothers standard genres: 2 tablespoons of fantasy swordplay, 1 tablespoon of Chinese melodrama, and a dash of Chang Cheh martial action. This mixture works surprisingly well, although not well enough to make for a completely satisfying film. Those following this review series will know that I’m not the biggest fan of the more drama-heavy wuxia pictures though, so if you are I can see this one being one of the better films of the genre.

The first half is rather light on action, but there is a good fight between Cheng Pei Pei and Lo Lieh. Later in the film there’s a wonderful scene in an inn, perhaps the best of the film, that purposefully harkens back to the tension of a similar scene in the Cheng Pei Pei classic Come Drink With Me. The scene here is much lighter in tone, but it delivers loads of thrills and an impressive, rousing fight sequence. Before the fight, one of her combatants even asks her to “Come drink with me,” so the scene and its similarities were obviously not an accident.

There are moments here and there where the two Cheng Pei Pei characters must appear on-screen together. Most of the time, one has her face buried in someone’s shoulder or her back is turned, or some such obvious trickery hiding that fact that it’s actually another person. But sometimes, they both face the camera in a completely seamless shot. It’s impressive how well the effect works, and while I’m sure it’s a simple technique that allowed them to achieve this, it looks great! There’s also a fair bit of subtle makeup work on the elder Cheng Pei Pei that helps to make the two characters distinguished from one another. The makeup changes over time (for reasons I won’t divulge) and is always done well. Most of the time makeup in Shaw Brothers films work is obvious and somewhat clumsy, with appliance edges unblended and visible, but Dragon Swamp features some truly impressive feats.

There’s a ton here to like for martial fantasy fans and Cheng Pei Pei fans alike. I’d definitely recommend it to you if you’re in either of those camps, but those looking for Chang Cheh action would obviously be better satiated somewhere else. Still though, any fan of Asian cinema will get a kick out of human skin masks, voice modifiers made of dragon scales and whiskers, the Dragon Swamp Master lifting huge stone guard dogs that no ordinary man should ever be able to move, etc., etc. It’s pretty fun, but at the same time, nothing particularly great. Good entertainment, in other words.

Next up in this chronological series of the Shaw Brother’s martial arts films, it’s Chang Cheh’s The Flying Dagger!