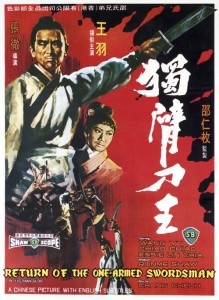 The Eight Sword Kings are so much fun. Each one wields a distinct weapon: from spiked wheels of death to a giant hook on a chain. Tien Feng plays their leader, a man so fast and skilled with his weapon that no one alive has ever seen what it is. That’s one hell of an advantage in a fight. The other Kings are played by such genre favorites as Ku Feng, Lau Kar-Wing, martial arts choreographers Tang Chia and Lau Kar-Leung, and Essie Lin Chia (easily one of the most fun characters in the film.) They all play their parts to villainous perfection as expected, as well as adding a layer of pure star power that big Shaw Brother’s fans will surely enjoy. There’s just so many unique villains in this film for the heroes to slice through that the latter half of the film is nearly non-stop action. And what crazy weapon-wielding villain would go down with a simple fight? Nope, they all get taken down in clever, inventive ways that subvert their weapon’s strengths and put them at a distinct disadvantage against the martial power of Fang Gang.

The writing in between the fight sequences is also very well done, with sub-plots weaving themselves throughout the film and paying off in grand ways. The best of these is the romantic angle between Fang Gang and his wife Xiaoman (Lisa Chiao Chiao). In an early scene of the film, she wants to tell him something as he’s walking out the door to help the sword clans out. She stops herself and Fang Gang leaves. It feels like it will foreshadow a later tragedy, as Chang Cheh’s writing is known to do, but he actually has other plans with this specific plot line. It comes up a couple more times throughout the film, and while I won’t spoil anything here, it helps the film come to a very satisfying revelation and conclusion. It reminds me in ways of the writing in Chang’s earlier film The Assassin, where many plot threads all came to resonate amazingly in the final moments.

The fights themselves are a mixed bag early on. It’s a lot of “many vs. many” fights, which are always hard to watch and just a hair’s breadth away from descending into sheer on-screen chaos. These moments are still fun to watch for a genre fan, but it’s when the film shifts gears slightly and the sword clans rally around Fang Gang that it all starts to get really interesting. At this point, Fang’s disciples all don the classic Chang Cheh heroic garb of pure white robes and if you’ve seen any Chang Cheh film, you know that the hero in the white robes is gonna go down with a five-minute fight sequence as he takes every bloody, intense injury he can before wiping out the villains before him and finally falling dead in a pool of his own blood and his now blood-drenched white robes. And this movie has like fifty guys in white robes! They can’t all possibly die like this can they? Apparently they can, so if you enjoy that sort of thing, then Return of the One-Armed Swordsman is going to deliver a nearly never-ending barrage of this in its second half.

The fights in this second half are decidedly better and feature so many inventive kills and non-stop bloody Chang Cheh violence that I was literally sporting a giant grin the entire time. In other films when the hero is run through with a sword, he’ll fall down dead. In a Chang Cheh movie he pushes the sword deeper to stab the guy behind him, then grabs the fallen bandit’s sword to violently force the sword impaling him out of his body and then goes on to slay another five or so henchmen. Add this to the villain’s unique fighting styles and weapons and you have such an enjoyable, endlessly entertaining film, you can’t help but laugh in pure joy. There’s also some really great one-on-one moments with Fang Gang, specifically between Lau Kar-Leung early in the film and Tien Feng at the film’s climax.

As I’ve mentioned in previous Chang Cheh reviews, after Golden Swallow Chang felt the wuxia genre was tired and wanted to branch out from it. In his memoir, he even wrote off this film (and the later 1971 film, New One-Armed Swordsman) as mere variations on a theme. To a degree this is true, but Chang’s artistic sensibilities wouldn’t allow him to completely switch off like that. Instead he delivered on the promise of a multi-villain picture like no other film had before. Many had tried (such as the highly disappointing Twin Blades of Doom) but Return of the One-Armed Swordsman does it, and does it exceedingly well. The feel of later kung fu pictures is brimming out of every plot point and fight scene, making this arguably as influential to the genre as the original film was. Instead of completely re-writing what the genre was at the time, it showed how it could evolve into something highly entertaining and much more fantastical than anyone had dared to do before it. That being said, there’s something of a going through the motions feeling to the opening half, but even that doesn’t rain on the parade of violence all that much.

The original film has Fang Gang’s character as a student, a pupil cast aside and done wrong by his superiors. He ultimately gets revenge on them and validates himself as a fighter, despite only having one arm left. Return of the One-Armed Swordsman takes the character into another realm, now a master with disciples throwing themselves at his feet. Well-written and remarkably well-made, Return of the One-Armed Swordsman is a true gem of 60s martial arts cinema. It doesn’t feature a shred of subtlety, but that was never Chang Cheh’s thing. Instead it delivers some of the best action the genre had yet to offer up, with the final twenty minutes throwing out pure action of the highest order. And it’s the screen début of Shaw Brothers star and general Hong Kong legend Ti Lung (not to be confused with Tung Li, who plays the Poisonous Dragon King)! Highly recommended.

Next up in this chronological series of the Shaw Brother’s martial arts films, it’s Hsu Cheng Hung’s Twelve Deadly Coins!