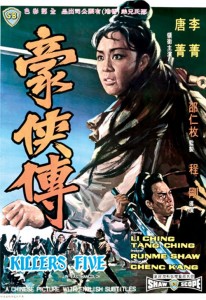 First to be recruited is frequent Shaw Brothers star Li Ching. For anyone reading along with all these Shaw Brothers reviews, you might have noticed that I tend to shy away from talking about the female swordswoman as a character. I’m not against it at all, but in many of the early Shaws, the characters are neither engaging or good martial artists. There are definite exceptions though, such as Cheng Pei-Pei in most anything and Li Ching in Killers Five. She’s so ridiculously good in this, and was probably my favorite character. She’s fun right from the moment we meet her, showing off her clever mind and happy-go-lucky personality. Later in the film when the shit hits the fan, she throws down with the best of them, laying waste to bandit after bandit. Her main skill is precision archery, and she uses this skill in such perfect ways throughout the film which result in some of the film’s best and most shocking moments. Did she just… Yep, that’s exactly what she did! Oh shit!

The next two members of the hero clan are Ku Feng and Cheng Miu, who both play their roles to perfection. Their characters are supposed to be old friends, so they spend the movie playfully, and comedically, messing around with each other. Their interplay felt similar to C-3PO and R2-D2’s relationship in Star Wars, but even more than that, I was reminded of Monkey and Pigsy’s back-and-forth repartee in Ho Meng-Hua’s series of Monkey King films. I’m sure this is no coincidence as a quick scan of Cheng Kang’s filmography shows that he wrote all four of those wonderful, funny films.

The final member played by Wang Kuang-Yu is never quite inducted into the ranks of the killers officially, with shrouds of mystery surrounding his true intentions. At the risk of sounding like a broken record, he’s fuckin’ perfect in this role, blending martial skill and stone-faced honor without breaking a sweat or even an increase in his breathing. Just like the characters in the film, the audience never quite knows where he’s coming from and which side of the fence he’ll land on, adding yet another layer of intrigue and awesome to an already awesome film.

After watching this one, it’s clear that Cheng Kang is one of the top Shaw Brothers directors of the era. His output was far less than someone like Chang Cheh (his next film came out a whole year and a half after this one), but he really knows how to deliver a stunning action picture. He injects clever shots and intense hand-held work at every appropriate moment, and his skill with the pen matches his eye for the interesting. The film’s narrative has a driving energy that just won’t quit, causing the slim eighty-one minute runtime to fly by in a glorious haze. What really sets this one apart from other Shaw films of the era is the obstacles it sets up in front of its heroes. In most Shaw pictures around this time, whenever the hero is ready to take out the bandit he simply shows up at their gate and announces himself. In Killers Five it’s a lengthy, stealth-driven sequence where the characters must cross the scarily titled Black River and scale a sheer mountain cliff teeming with guards. I’m sure you’ve seen tons of “assembling the badass group of people to take out the even more badass villain” movies, but Killers Five does it with such style that you’ll quickly forget you’ve seen this story before. I don’t say this often, but Killers Five is so good that I could easily watch it again immediately.

The editing in the film is also nothing short of perfect. Unlike many of his contemporaries, Cheng Kang seems to realize the importance of editing to create a stunning, impressive martial arts sequence, and he literally writes a textbook example for everyone to follow with Killers Five. It’s truly ahead of its time, and a signal of where the genre was heading. Also, Killers Five features some of the coolest uses of reverse filming ever put to celluloid, with Li Ching throwing peanuts and embedding them into wooden posts and Wang Kuang-Yu catching thrown coins on his closed fan to prove his worth as a martial artist. I never get tired of these cheap thrills, and they’ve never looked better or been as effective as they are here.

In addition to all the wonderful sets you know and love the Shaw Brothers for, Killers Five shows off tons of actual outdoor locations as well, and they are gorgeous! From beautiful waterfalls to lush, green mountainsides, Killers Five gives you a real sense of a journey as the characters traverse these stunning locales. It truly offers everything I could want in a martial arts film, and I say that without caveat. Sure, the choreography is still somewhat slow and there are bits early on that are slightly under-cranked and therefore look too fast and dumb, but the editing and Cheng Kang’s intense style overrides any negatives from those aspects of the film. His power as a director sucks you into the film quickly, allowing martial arts fans from any era to experience and revel in the wonderful spectacle of Killers Five. What an awesome movie. Pure fun from start to finish. Highly recommended.

Next up in this chronological series of the Shaw Brother’s martial arts films, it’s not a martial arts film! I’ll be reviewing Chang Cheh’s first foray into musical filmmaking with his 1969 film, The Singing Thief!