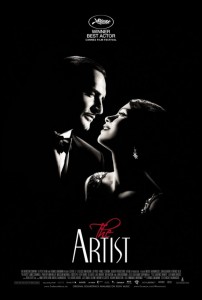 But back to The Artist. It’s OK. Once you get past the novelty that it’s black & white and it was filmed in old school, 1.33:1 Academy ratio, it’s really a rather simple, boring story. If you’ve seen any “rise and fall” film, you can stay home and enjoy those two hours however you’d like because you know exactly how the film will play out. George Valentin is a silent film sensation, until the plucky new girl in town Peppy Miller gives him a run for his money. The Artist is definitely enjoyable overall, featuring a few genuine moments of brilliance, but Best Film of the Year talk is just ludicrous. OK, it looks like an old movie, big fucking deal. How ’bout an original story? For me the film also falls short on the nostalgia factor, a commodity The Artist spreads around like it’s sand at the beach. Instead of simply targeting the twenties and the styles of the silent era, director Michel Hazanavicius ropes in elements of film noir, pre-code 30s comedies (the breakfast table scene feels strongly of Lubitsch, at least visually, as well as Big Daddy Citizen Kane in subject matter) and 1950s melodrama. In a strange turn of events, the era the least represented is the 1920s! The film opens with one of Valentin’s silent films, but instead of evoking the feeling of a silent film, it feels like a 30s serial. It’s fun, I don’t want to take that away from the scene, but it never looked right to me.

To add to this feeling, later in the film Valentin watches some old film reels. We’re led to believe that he’s been binging on them all day?/week?/month?, but the one we see him watch is actually the Douglas Fairbanks film The Mark of Zorro from 1920. Valentin gives off something of a Fairbanks vibe throughout the film, so I was puzzled by showing the actual Fairbanks here. Not only does the footage look remarkably different from anything previously shown, I wonder if we as an audience are supposed to think that this is one of Valentin’s films, or if we’re supposed to get the reference and reminisce about Fairbanks. It’s a small moment and arguably one that doesn’t matter, but I can’t imagine I’m the only one to instantly identify the classic film and wonder what was going on.

On a more positive note, the dog is cute as hell and totally steals whatever scene he’s in. The dog itself seems to be a reference to The Thin Man films and I wouldn’t be surprised if we see a whole host of cute dogs in films again because of this. You just can’t deny a cute dog. Not to be completely outdone, both Jean Dujardin & Bérénice Bejo also pull out top-notch performances. They’re a joy to watch and both look absolutely stunning as old Hollywood figures. They truly nail the look of the 30s and Hazanavicius creates some very memorable, amazing shots throughout the film.

The most egregious offense is the climactic scene of the film that features key music from Bernard Hermann’s classic Vertigo score. Does the music work in the scene? Yes. Does it help the movie overall? No. In fact, the use of Vertigo‘s score instantly took me out of the film and had me questioning why it was being used. I started re-examining the plot and wondering why music from Vertigo would be used in this instance. I didn’t take it simply as music, but as commentary on the scene itself. While watching I came to terms with it and saw how little elements of Vertigo‘s plot had been taken and re-purposed for The Artist. But while the music works over the scene, it ultimately makes me think less of the film as it blatantly exposes how the film is nothing more than carefully composed nostalgia. Am I supposed to be impressed with this? Or am I supposed to just think about how much I love Vertigo while The Artist ends and then walk out of the film riding that nostalgic love of classic Hitch? Really? And film critics are accepting this shit?

I was excited to see a new silent movie, but instead I got a jumble of old Hollywood references and a story as old as sin. I’m truly sick of these bullshit nostalgia films that seek to make a film of the past, but instead do so only with a wink and a nod. Then when people call the filmmakers on it they reply that it’s a love letter to whatever they’re trying to capture. If you want to make a silent movie, just make one and leave the references at the door. It doesn’t have to be about classic Hollywood either (or perhaps it does to attract the attention of the industry), it can be anything you want. Look at the silent movie within a movie in Almodovar’s Talk to Her for a perfect example of a good way to pay homage to silent films without relying solely on stealing specific story elements from them. That’s where The Artist really dies for me; instead of creating a new, genuine piece of art, they went and wrote a love letter that seemingly doesn’t understand what made silent films great. Just by making a silent movie you are honoring old Hollywood. We don’t need our heroine spouting fuckin’ Greta Garbo lines in the inter-titles.