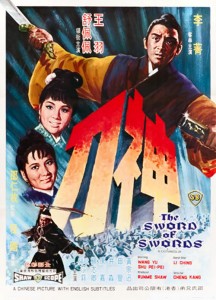 The story is quite interesting and engaging, even if it is a somewhat clichéd revenge tale. Basically an old master is in possession of the sword in question. One of his students is a bandit in disguise (Tien Feng) and he is in constant rivalry with the younger, nobler Jimmy Wang Yu. When the master falls ill, he calls a tournament between his students to decide who should receive it. Tien Feng is found out as a traitor, but manages to escape with his life at the compassion of Wang Yu. The master then entrusts the sword to Wang Yu and so begins our tale of cat and mouse between Wang Yu and his evil rival Tien Feng.

Let me just get this out of the way: Tien Feng is fucking awesome in this film. He plays the villainous asshole perfectly and is able to back it up with some serious displays of kung fu during the fight scenes. I never think of him as a martial arts actor, but he completely obliterates my preconceived notions with his performance in The Sword of Swords. He fights Jimmy Wang Yu one-on-one a few times throughout the film, and each fight is intense and memorable. Up until now there hasn’t been a lot of one-on-one fight scenes (instead leaning more on the “one vs. many” trope), but the fights between Tien Feng and Wang Yu are awesome and I hope they signal a shifting dynamic within the Shaw Brothers films of this era, so I can start seeing more fights like this. One-on-one fights are perhaps one of the most iconic and modern features that kung fu films have going for them, and personally they are my favorite style of fight. Nothing against the single dude laying waste to a room of bandits, or Jackie Chan having his way with a group of thugs around a playground, but there’s just something special about one person facing off against another in the ultimate test of martial skill. I better not work myself up too much, this action shift will probably take a number of films to catch on.

My favorite fight in the film is the one that comes a little after the mid-way point of the film, where Tien Feng and Jimmy Wang Yu face off on a mountain road as a snowstorm builds around them. As the intensity of their fight grows, the snowfall gets heavier and the cries of Wang Yu’s child get louder and louder as he gets more uncomfortable with the sounds of battle and the snow. It’s a wonderful three-pronged scene that is perfectly shot and edited. This is the first fight scene in this Shaw Brothers review series that actively made me think of later glories and specifically Lau Kar-Leung’s own directorial efforts in films like Challenge of the Masters. It’s not up to the level of the forest fight in that film, but it did make me think of it and it’s easy to see the beginnings of that style of fight scene (which continues to evolve in modern films such as Ip Man) in this snowy, gorgeous fight in The Sword of Swords.

My only criticism of The Sword of Swords is that it’s a little too long and the melodrama factor is all the way up to eleven. I’m not scared of melodrama, but there are moments so thick in this film that I was nearly paralyzed in my seat by the sheer, gelatinous weight of it all. This high melodrama bleeds into the violent action scenes as well, so The Sword of Swords features over-the-top violence that would make Chang Cheh proud. From darts to the eyes to severed hands and ridiculous gushes of blood, The Sword of Swords will satisfy the martial gorehounds out there, even if it is somewhat tame by later genre standards.

And if all of that hasn’t sold you on the film, this is also the film where you can see Jimmy Wang Yu’s screen father tell him he’s worthless trash and then proceed to beat the shit out of him with his fists and then a small bamboo table.

Next up in this chronological series of the Shaw Brother’s martial arts films,  it’s Lo Wei’s Death Valley!