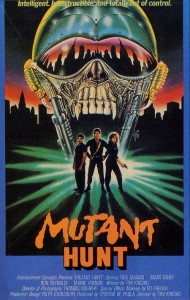 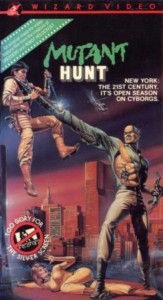 So if the plot is nearly non-existent what fills most of the runtime you ask? Kick-fucking-ass, amazingly shitty, phenomenal karate fights, that’s what! I might get a bigger kick out of these than the average Joe because of my affinity for martial arts films, but I absolutely loved every moment of on-screen fighting Tim Kincaid decided to grant me. Every fight is a comedy tour de force with more roundhouse kicks than even Chuck Norris could dream of throwing in one film.

The first major fight scene comes in the apartment of our main hero Matt Riker (Rick Gianasi, who was also Sgt. Kabukiman in Troma’s classic flick). Matt is aroused out of bed by a girl who seeks his help in defeating the mutants chasing her. Good thing Matt is prepared for war; he literally sports an entire arsenal of weapons from around the world on the four brick walls of his dwelling. He also fights off the two robot mutants wearing only his tight-fitting briefs, fulfilling the bullet point that every Tim Kincaid has to have a “dude in his underwear” scene. Inexplicably with all these weapons around him, his first instinct is to grab the pair of handcuffs on the table and shackle one of the mutants to the radiator. While he fends off the other one with one lackluster kick after another, the handcuffed mutant stretches his arm like Mr. Fantastic to grab a machete off the wall and then hack off his own hand.

Later we’re introduced to Matt’s buddy (and fellow roundhouse kick practitioner) Johnny Felix played by Ron Reynaldi. Johnny isn’t just a fan of the roundhouse, he takes that shit to new levels of awesome. Have you ever seen a half roundhouse to the back of a mutant’s knee? Neither had I, but after experiencing it, I can safely say it was something I needed in my life. At one point he roundhouse kicks two mutants to the face with one kick, and then stomps on their heads after they hit the ground! You can’t argue with his martial cred at that point; the guy is just flat-out tough as nails. In addition to the wonderful fights and their “incredible” choreography, every time a fight starts the same synth track plays over the soundtrack. There’s a lot of fights in this, so every time I heard the opening notes I struck a big-ass grin because I knew I was about to receive solid gold bars of B-Movie joy.

Amidst all the fights there’s also a pretty fair amount of gore and low-budget FX. I gotta say, the FX are really good for a film of this budget and really add a lot to the experience. My favorite is the mutant that gets left for dead in Matt’s apartment early in the film. Slumped in the corner, he slowly disintegrates over the course of the film until the third act. He comes back to life at this point, but he’s missing his jaw and he’s a serious candidate for some experimental skin grafts. The guy’s got a heart of gold though. His drug-fueled murderous tendencies abated for now, he offers his assistance to help hunt the remaining mutants, or some shit. Like I said, I didn’t really pay attention to the dialogue. In any case, the FX look great on this character, as do all the severed hands, green squirting goo, mutants punching through concrete walls and decapitations. I’m positive the FX budget was where most of the money went so it’s nice to get such pleasing results.

The finale features all three of our heroes each pitting their shitty karate against some mutants. The scenes are crosscut, but in the loosest sense of the term as the editing does nothing to increase the tension or the feeling of danger. At this point it’s a little late to get critical of the filmmaking though. What the film’s finale lacks in traditional storytelling, it makes up for with a ton of roundhouses and one of the most hilarious jump kicks I’ve ever seen, so that should be enough to satisfy.

Mutant Hunt is a piece of shit film, for sure, but one that packs in so many horribly awesome karate fights and really fun, good quality gore that it was an absolute blast to watch. I even watched the finale twice I enjoyed it so much. This is definitely high-level B-Movie watching, so anyone who enjoys such things should get a full-spin, roundhouse kick to the face out of this one. Mutant Hunt was recently released to DVD for the first time by Full Moon as a part of their Grindhouse series, so if you don’t have Netflix Instant, that’s the easiest way to check this one out.