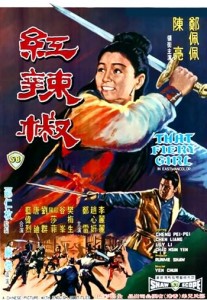 Cheng Pei Pei does another great job as one of the bandit leaders and due to the romantic/action nature of the film, she is allowed to showcase her ability to play both the hard-nosed killer and the starry-eyed, tender girl in love. This is one of the best Cheng Pei Pei vehicles I’ve seen yet, and while her tonal shifts are definitely a bit over-the-top, they fit the film well and will definitely entertain her fans. Cheng Lui is great as the film’s main antagonist, going toe-to-toe with the main hero Chan Leung many times throughout the film. Their cat-and-mouse interplay is great and provides much of the film’s entertainment in the first two-thirds.

Director Yen Chun seems to have improved quite a bit since his last martial arts film, That Man in Chang-An. The camerawork here is solid and full of movement and vitality. The action scenes are very well shot with editing to match, creating some of the best fight moments so far in the history of the Shaw Brothers. Seriously, the editing that leads to the bamboo impaling is fantastic, as it absolutely sells the effect to the audience without it ever seeming fake. The color cinematography is also especially nice here, with the colored robes of the characters popping off the screen. Additionally, there’s a flashback filmed in black & white, which might sound gimmicky in text, but it works beautifully in the film.

If That Fiery Girl ended in a standard romantic way without the giant action scene, I’d probably give this one two stars for being well-done and enjoyable, but absolutely forgettable. Thankfully it doesn’t end like that, instead choosing to blast the viewer with fifteen minutes of pure awesome. It easily raises the film above many of the Shaw Brothers films of the era and while the rest of the film isn’t quite up to the same quality, it doesn’t matter. The strength of that ending is worthy of the three stars just on its own. I definitely recommend the film to fans of Cheng Pei Pei and older Shaw Brothers films; just hang on through the melodrama and you will be rewarded.

Not the best quality, but this is all I could find.

Next up in this chronological series of the Shaw Brother’s martial arts films, it’s Cheng Kang’s The Sword of Swords!