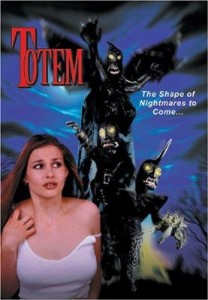 Totem is pretty light on storyline in its opening moments, instead throwing you right into the main conflict after the extended credits sequence. We see a girl running through the woods and up to a cabin. There she meets up with a group of five others who were all inexplicably called to the cabin from the daily lives. They are unknown to each other and cannot remember why or how they got there. I just finished the Philip K. Dick novel Ubik, which also features a group of people stuck in a situation they can’t understand or explain, so watching Totem today was fortuitous.

What makes the first half so enjoyable for me is the inspired direction from David DeCoteau and the stupid hilarity that only badly dubbed lines and cheap FX can give me. DeCoteau’s camerawork is in fine form here, shooting the film with lots of creepy Dutch angles and a floaty camera that ever-so-slightly moves while the characters are talking to give the film a dreamy, off-putting quality. It completely worked for me,  creeping me out and intriguing me visually all at once. As for the bad lines, my favorite comes when the group finally ventures away from the cabin and finds the graveyard. One of the dudes yells out, “Jesus! More weird shit!”, which in and of itself isn’t all that hilarious, but the line is delivered in a stilted cadence with just the right amount of bad acting to make me burst out laughing and quickly reach for the rewind button.

In addition to these types of badly dubbed laughs (which I’ve come to expect from David DeCoteau films), there’s also at least one of a more philosophical nature. When the characters first find the stone totem in the graveyard, one of them states that it cannot be a totem pole as they were never made of stone. Another character supposes that perhaps this object was carved to look like a totem pole. But then our lead character Alma comes through with the abstract wisdom when she theorizes that “Maybe all the others were carved to look like this one.” Fucking deep shit, man. A Full Moon film questioning the beginnings of things and the nature of reality and perception, I can dig it, but I never thought I’d see the day. This is a major theme in Dick’s Ubik as well, so I’m again astounded at the star alignment that allowed me to finish that book on the same day I watch this film.

So you’d think a film this short, which satisfies and entertains as well as it one does in its first thirty minutes, would have no problem sealing the deal and finishing strong. Unfortunately, that’s pretty far from the truth as the second half devolves into a more traditional low-budget horror flick where party members are slowly picked off one by one. In classic late 90s Full Moon fashion, none of the kills feature any gore or FX to speak of and are therefore ridiculously uninteresting. Once the major plot point is revealed at the half way mark, it’s readily apparent how the rest of the movie will play out and Totem offers no surprises. It’s a shame because I was really enjoying this one on multiple levels until it became the boring, obvious film I initially expected it to be.

Even with the sagging second half, I’d still recommend Totem to fans of low-budget horror cinema and Full Moon aficionados. This can’t hold a candle to the big Full Moon films like Subspecies or Puppet Master, but it contains a fair amount of charm and a surprising amount of quality filmmaking. And for the record, the totem puppets featured here are definitely not the same totem puppets from Puppet Master 4 & 5. Unless they were wearing disguises, these guys looked and acted completely different. That’s what I get for believing some random fact from the film’s Wikipedia entry.

Next week, I’m going back to the 80s for some more Tim Kincaid trash, Mutant Hunt!