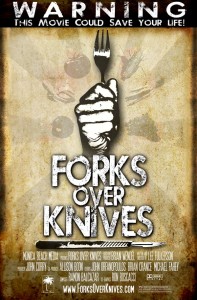 Before I watched Forks Over Knives, I was aware of the benefits of a plant-based diet for your health, so the content was not the revelation that it may be for some. I felt the same way about Food Inc., but this doesn’t stop the film from being one of the best made documentaries of the year, though. The information is presented well with 3D charts and the like, but where the film shines is its personal stories from disease sufferers that have transitioned or are transitioning their diet over the course of the film. It’s truly amazing and inspirational to watch these people go from taking multiple pills and injections on a daily basis to being medication-free via the healthy methods of diet. It’s unfortunate that many of the people who could benefit from seeing this film will largely avoid it because of the negative stigma towards veganism (although they very carefully try to avoid using that word specifically during the film).

The main focus is on two pioneering doctors that have dedicated their careers to the study of diet on cancer growth. One doctor is primarily a researcher, working with data and large-scale studies. The other doctor takes a clinical approach, working directly with a small group of high-risk, near-death patients with heart disease, cancer & diabetes over a multi-year period. The evidence of both doctors is presented directly and while it is definitely one-sided and some points are questionable, the simple fact remains that a fresh, healthy diet is a definite improvement on the traditional Western diet.

Regardless of whether you believe the information presented here or not, the fact remains that we as Americans generally practice absolutely awful diet habits. I would love if everyone was required to watch this film and become more informed about the importance of the food they consume, even if they don’t end up going whole hog (pardon the expression) and switch to a completely plant-based diet. Forks Over Knives is remarkably well-made, expertly shot and edited together, keeping the flow at a good pace and never allowing the film to get stale or boring. Towards the end it does get a little too hippie-dippie and preachy, which therefore becomes the final taste left in your mouth, so this will definitely put off some people. Don’t let that stop you from watching the film, though, as it’s easily one of the best docs of the year. Highly recommended.