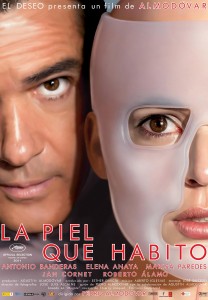 But as in any Almodóvar film, Almodóvar is the driving, directive force behind the production, fueling it with passion and a relentless desire to plumb the depths of human nature and sexuality in all its forms. He never fails to deliver some fucked up shit, and The Skin I Live In is perhaps the most fucked up yet. The nature of the tale requires some suspension of belief and in lesser hands, it wouldn’t work anywhere near as well as it does here. It features elements of horror, science fiction and thriller genres and what could be laughable and over-the-top is chilling and utterly believable, all framed within the lens of a master visual storyteller. As expected the cinematography is fucking flawlessly beautiful, making even a car’s brake lights look incredible. His trademark use of color is more subdued here than I’ve seen in other films, but it’s still present, integral, and complemented by his spot-on eye for image design and framing.

After Broken Embraces, his ode to cinema (and to editing), it’s only fitting that Almodóvar moves to a less ambitious film that exhibits perfectly the qualities he champions in his previous film. When the drama gets tense, the edits tighten the screws with precision, causing the audience to shorten their breaths and move to the edge of their seats. And then at just the point when you think you might know where the film is going (or where it is coming from), Almodóvar rips the rug out from under us all, pulling the story back in a direction previously unseen before bringing everything back around into an incredible revelation and finale. That said, I think this is the weakest of the four Almodóvar films I’ve seen, but weakest of four fantastic films is a distinction akin to splitting hairs and honestly shouldn’t matter.

I can’t say enough good things about Almodóvar. I am doing a lot of gushing here and I can’t imagine that it’s too much fun to read, but I literally can’t help it. I’m nearly convinced that Almodóvar is the greatest working director right now and each film I see only makes this theory all the more concrete. He always tackles challenging topics and confronts sexuality in ways that American filmmakers won’t dare to do fifty years from now. I’m consistently impressed with his ability to write characters that are both sympathetic and distressing, usually endearing them to the audience just enough to make everyone leave with conflicted feelings that must be discussed over an after-movie meal. The story is multi-layered and only continues to get better and better as each layer of the onion peels back. I’m a fanboy and proud, The Skin I Live In was awesome. I already wanted to watch it again about halfway through.

I don’t recommend watching this trailer before watching the film, but I provide it for reference.