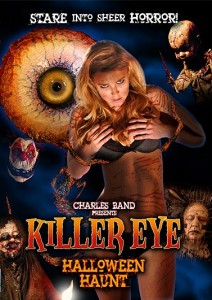 If you read last week’s review of The Killer Eye, you’ll know that I hold no love for that trashfest, but it was somewhat entertaining. And the footage from that film is pretty much the high point of this one. Don’t get me wrong, simply showing footage from a previous film is one of cinema’s greatest sins, but it acts here as a respite from the unenjoyable, horribly written sequel. Of course, the girls provide commentary/MST3K-style comments over the footage, but none of this is either interesting or funny. I did enjoy when the girls happened to watch the scene when a character watches another Full Moon film, Creepozoids. So I’m watching a Full Moon movie where the characters are watching another Full Moon movie where the characters are watching a third Full Moon movie. Wow, this is the Inception of Full Moon films! This meta moment was probably the most amusing part of the film, but even that didn’t provide more than a quick chuckle. If Killer Eye: Halloween Haunt had a shred of the first film’s fun it would be infinitely more enjoyable, and I never thought I would be begging to return to that original film!

On the technical front, the film is a mixture of competent but boring filmmaking, and flat-out bad technique. The cinematography throughout is overly dark, resulting in ugly shadows dominating the image and causing the actresses to blend & fade into the equally dark backgrounds. Their first dialogue scene together is also a textbook example of awful editing, always cutting to the wrong person at the wrong time. Two girls move in for a high-five? Cut to the third girl looking on. WTF. In addition to this, when they cut to full-screen footage from the original, it’s stretched to fit a widescreen aspect ratio instead of being cropped. C’mon guys, this is the easy shit.

The Killer Eye itself also isn’t the over-sized, funny-looking killer eye from the original, it’s a replica (available now from www.fullmoondirect.com, don’t forget!). So instead of funny situations with the eye sneaking up on humans via air ducts and poking his eye around doorways, the eye just slithers around on the ground and sits on tabletops. He’s not menacing or funny at all and is merely a catalyst for the girls to take their tops off or kiss each other. As a dude, I can’t help but enjoy the nudity of beautiful girls, but it’s so fucking trashy, gratuitous and poorly handled here that I have to take issue with it.

At this point, I never come into a Full Moon horror film with expectations that it will scare me, and Killer Eye: Halloween Haunt is no different. Unless you count awful writing because some of the lines in this one were fuckin’ horrifying. The original was awful, but oddly fun. The sequel is awful and nothing else. At least it had the decency to only be sixty-seven minutes long and in a way, this film is the best possible ad for the original film. Contrasted against the utter shit of Killer Eye: Halloween Haunt, The Killer Eye looks remarkably watchable and interesting, and will no doubt sell a few DVDs. I still wonder why a sequel to The Killer Eye now, after all these years. I suppose a sequel to a poorly received Full Moon film is better than no sequel at all, but I for one would rather them pool their production money together and make one good film instead of the multiple shitty ones they seem destined to produce in the current era.

Next week, I need something fun to cleanse my palette after this one, so I’m going to put off the other new Full Moon film I have, Gingerdead Man 3: Saturday Night Cleaver, for a later date. Instead, I’m going back to the pre-Empire 1970s for Charles Band’s earliest surviving film, Crash!, which promises loads of car-crash excitement. I hope it lives up to that exclamation point in the title.