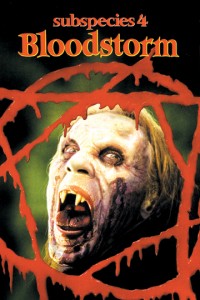 This is by far the lowest budget Subspecies film, but by no means is it the worst. It’s actually a lot more interesting that most of the third entry, and it’s a lot faster moving than the side story Vampire Journals. This entry is definitely its own thing though, as it features Radu in a slightly more subdued role and the abundance of vampires here gives it a warring tribes feel similar to Vampire Journals. In some ways, it doesn’t feel as over-the-top and zany as the previous films because of this, but for my money this was one of the most enjoyable films in the series. Radu isn’t always the top dog here, as fellow residents of the night jockey for power and control of the bloodstone.

Ash from Vampire Journals inexplicably returns after being completely disintegrated in the previous film, but as Radu has come back from any number of film deaths, I neither expect a ludicrous explanation or a logical reason why he’s back here. I’m sure it was something like Jonathon Morris taking the least amount of money or something, but I’d like to believe that somehow he pieced the infinitesimal pieces of his corporeal body back together with an ancient, black ritual. Oh, and don’t expect any sort of continuation or closure of the storyline of Vampire Journals, as you will receive exactly zero. It’s unfortunate because it seems like there would be enough there to produce a sequel, and Full Moon has been known to produce sequel long after there was enough to make one. I guess people would rather have a film with Radu, and I can’t blame them honestly.

Ted Nicolaou continues to do a bang-up job setting up a thick, gothic atmosphere inhabited by snarling vampires and clueless humans. As with all the Subspecies films, the vampires move effortlessly about their world by using shadows and it never ceases to impress and dazzle me. It’s such a simple effect, but it proves that if a special effect works, it works regardless of the time or money spent on it. Subspecies 4 is also one of the more gory films in the series, with a couple of satisfying, meaty decapitations and a veritable smorgasbord of bloody neck bites. While a lot of that neck blood is simply smeared on the faces of the vampires and the necks of the victims without a hint of spurting veins, the editing is done well enough to sell the scenes and make everything as believable as a bloodsucking vampire can be. This one also features a number of medical related squirm scenes for those that have an aversion to needles. I’ll admit it, I suffer from this. This might come as a shock as I’m such a gorehound, but the minute there’s a needle on-screen, I’m wriggling in my seat like a five-year-old waiting for the bathroom.

Subspecies 4 is a wonderful end to the series, filled with gory decapitations, gothic visuals and another luscious performance by Anders Hove as Radu. I’m always surprised at how well a lot of these deep Full Moon sequels hold up, and Subspecies 4 is a definite highlight. It manages to be one of the most entertaining entries in the series and a pretty respectable film as well. Obviously, if you haven’t seen any of these don’t start here, but if you have and you’re on the fence, definitely give this one a shot. It may be a fourth sequel, but Subspecies 4: Bloodstorm delivers on every promise it sets out to deliver.

Next week, we go way back to 1982 and the début film of Demi Moore, yes it’s Charles Band’s 3D horror flick Parasite!