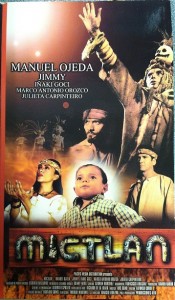 Expectations: High. For me, this is one of the most exciting moments in the history of this site.

Some background must be given before I start my review. About six or seven years ago, on a lazy weekend afternoon I flipped the channels around in hopes of finding something worth watching. Nothing caught my interest until I happened upon a nighttime desert scene where a guy shot electricity out of his staff, frying his enemy to a charred crisp. I immediately sat up to take notice. Telemundo was showing one hell of a film!

I watched in awe for the next twenty or thirty minutes, but I became bored and changed the channel when the film slowed down and moved into more dialogue-heavy sections. Despite taking two years of Spanish in high school, I don’t understand a lot of the language, and I convinced myself that the rest of the film wouldn’t contain anything as spectacular as the stunning FX-filled intro sequence. As the years passed, I regretted this decision more and more, and I found myself doing Internet searches for the film. They all returned almost no results, apparently no one else shared my fervor for Mictlan. One day I decided to check out my local library’s resources, wondering if perhaps they could acquire me a copy from another library through the magic of Interlibrary Loan (ILL). Three libraries in the country admitted to owning copies of the film: two on DVD, one on VHS. After multiple requests over the course of about a year, I finally managed to get the VHS copy sent to me and miraculously my multi-year search was over. The film built up a mystical vibe as my memories faded… How the fuck can any ultra low-budget film withstand this kind of unrealistic hype? With a shitload of electricity, flying kids and people morphing into animals, that’s how! 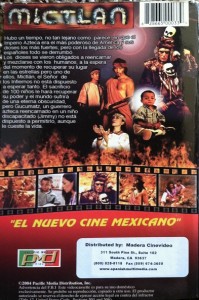 The story of Mictlan is a simple one, so simple in fact that I was able to follow it pretty closely without the aid of subtitles. I could attribute this to the wonderful visual storytelling prowess of director Enrique Martinez, but realistically it’s more so due to the clear and concise story. The film opens with a Star Wars-style opening scroll that sets the stage before dropping viewers into the middle of a flashback to more ancient times when the evil Mictlan (El Senor de los Muertos!) has rounded up a bunch of kids to sacrifice. Our heroes Gucumatz (El Guerrero de los Dioses!) with his magical staff & his girl Xochitl (Una Hada Magica!) with her magnificent fireballs soon bust in to make short work of Mictlan and his henchmen. They save the kid about to get his heart punctured with a giant obsidian blade, but in order to do so, Gucumatz dies in the rubble of the explosion meant to kill Mictlan.

Years later, the saved child has grown into an adult who still suffers from nightmares of this fateful day. As we wouldn’t have a movie otherwise, it quickly becomes clear that Mictlan was not truly defeated. The dude’s girlfriend is seen taking to Mictlan in a restaurant’s bathroom mirror and Xochitl has a run-in with one of Mictlan’s shape-shifting goons that got away. The only problem is that without Gucumatz to fight him, Mictlan is unstoppable. His henchmen steal children away in the night, taking them to a makeshift cave jail at his desert hideout. Through some unexplained means, Xochitl figures out that Gucumatz has been resurrected though, which leads to some of the film’s best moments. Like the Dhali Lama, Gucumatz is reincarnated in a small child (played by Jimmy). Jimmy’s powers have begun to manifest themselves when after breakfast he refills his orange juice by waving his tiny hands at it and concentrating. 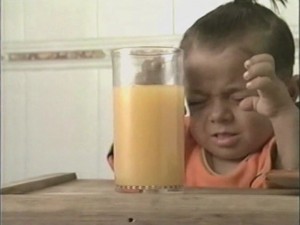 As rare as this film is, I could probably describe the entire film without spoiling it for anyone as it’s nearly impossible to see. I feel some respect and honor must be given to the film though, because despite how low-budget and quickly produced it may seem, Mictlan is actually a pretty well-made little movie. Much more so than even I expected it to be. I was especially impressed that I was able to follow the storyline without much thought, and the digital FX were fantastic and added so much fun and fantasy to the film. The FX reminded me a lot of the digital FX that characterizes the modern era of Full Moon’s films, but they are so abundant in Mictlan that even I became somewhat desensitized to their captivating magic.

The acting is a little up and down, going from the impressively subtle looks of child actor Jimmy to the more over-the-top dialogue exchanges between Gucumatz (Iñaqui Goci) and Mictlan (Manuel Ojeda). For what it is though, I was incredibly impressed with the quality of the production. The budget on this was probably 1/1000 of the catering budget on a low-budget Hollywood film, but it’s clear that the actors and the creative team put everything they had into this film. I’m not saying it’s some hidden gem that arthouse snobs will appreciate, but it is a shame that the film is not more readily available for people like myself that enjoy fare from both sides of the balance sheet. Maybe my storied journey to this film I never thought I’d see again added to my enjoyment, but I had such a wonderful time with the movie despite the hype, the language barrier and the poor, faded, flickering quality of the print.

All in all, Mictlan is a fuckin’ blast and nothing short of a total hoot for fans of B-movies. It’s damn hard to get a hold of though, so start diggin’ in those bargain bins and maybe you’ll uncover some Mictlan gold. If you do, let me know as I’d love to own a copy of this rare and out-of-print film! It’s incredibly hard to find info or reviews about this one on the Internet (Wait, the Internet doesn’t have everything?), but I was able to hunt down one review in Spanish from a film festival around the time of Mictlan‘s release. Check it out!

And now before I go, the entire opening scroll of Mictlan for your reading pleasure:

And now in English thanks to Google Translator. It takes out words here and there but you’ll get the gist.