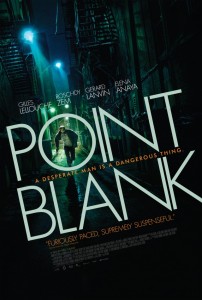 In addition to this, there are multiple times during the film when the camera choices made by director Fred Cavayé seem to do a disservice to his film. At one point, our main character must leap from one building’s window into another building window across the way. Instead of shots to establish the distance or his fright in making such a jump, the film simply cuts from him kind of leaning out of the window to a shot of him leaping. It’s a jarring cut that realistically is something very minor, but it hurts the flow of the scene and belittles what should be a very thrilling moment on-screen.

As the film moves on, the film gets more and more crazy, but instead of the tension ratcheting up with it, I became even more tired of the film. It makes some huge logic jumps that I don’t even want to bother trying to dissect, but the biggest transgression to me came during the climax, when Cavayé completely botches the great potential of three suspenseful crosscutting scenes with some incredibly strange editing choices. And that’s really the heart of my feelings about this film, Point Blank has a ton of potential but it fails to truly utilize everything at its disposal. Where it does shine is the acting. Everyone involved plays their role perfectly and believably. I was especially impressed with Roschdy Zem’s performance as the safecracker the main character gets involved with for most of the film. His stalwart gaze told the audience everything they needed to know about his character’s personal makeup, and apparently the filmmaker’s agreed with me, as that’s about all you get for character development.

In spite of these nagging issues, Point Blank isn’t as bad as I may be making it sound. It does have a lot of cool moments and if you’re not quite the editing nerd I am, I’m sure you will have far less problems with the film than I did. I do want to say that overall the editing is impressively done, with restraint and without a lot of quick cut MTV bullshit. My editing issues are purely with the way it tells its story through cuts. Whatever… I did enjoy Point Blank, but it’s very light on substance, and it doesn’t really have the style to make up for this. Oh well. I have a feeling I may be in the minority on this one.