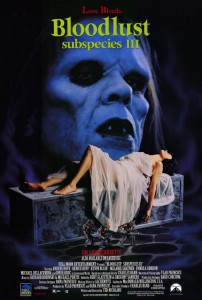 That is, until the final half hour. At around this mark, the forgettable white guy calls in his CIA buddy Bob, a total gun nut with an opportune passion for rock climbing. Between Bob and Lt. Marin, Bloodlust is easily the most comedy-tinged entry into the series. While some might cry foul at this, I welcome the shift. To me the series is already relatively funny due to Anders Hove’s incredible line delivery, so more comedy elements only help the proceedings. Anyway, Bob not only brings some comedy, he also signals a shift into the only truly awesome section of Bloodlust: Subspecies III.

After scaling the castle’s rock wall and penetrating deep into the vampire’s lair, Bob and Mel (the forgettable white guy… I finally got tired of typing all that and looked his name up) come upon Radu’s decrepit mom, Mummy, about to slay an imprisoned female. Bob shouts, “Heads up, Granny!” and fires his automatic weapon at her. Undeterred, Mummy slowly turns to face Bob while extending her arm that holds a long blade. Suddenly the knife flies from her motionless hand, plunging deep into Bob’s forehead! OK, now we’re getting somewhere!

This leads into the finale of the film, which is one of the most gratifying and fun ending sequences in recent memory. It doesn’t quite make up for the boring first hour of this film, but goddamn it’s an awesome way to end the movie. I won’t spoil it for those that plan on checking these out, but suffice it to say, it’s the goriest, craziest, most over-the-top series of moments in the entire series so far, and if I didn’t already know there was a Subspecies IV, I’d say it wasn’t possible. The intro to that one is gonna have some ‘splainin’ to do!

Overall, Bloodlust: Subspecies III is a boring film that happens to feature one of the most fantastic and satisfying endings I’ve ever seen in a low-budget horror film. For that, it’s totally worth watching, but it is a bit of a slog to get through the first hour of this one, and I’m someone who really enjoyed both of the first films. Shot back-to-back with Subspecies II, this film retains the same visual aesthetic and creepy atmosphere as its predecessors but it just can’t hang in the story department.

Before I go I just want to make one more random observation about Radu in these films. There are many vampires over the course of these first three films and, as you’d expect, said vampires do a lot of blood drinking. One thing sets Radu apart from the others though. It’s not his relentless desire for blood, his personal style, or his wonderfully emotive facial expressions. OK, all those are true as well, but what I’m speaking of is his hygiene. Throughout all three films, Radu sports a seemingly permanent blood splatter all over his chin, with blood oozing out of his mouth with every line Hove expressively delivers. He never wipes his mouth! It’s such a permanent fixture on his face that the Halloween mask Full Moon released last year also features a dirty, bloody mouth. Perhaps if they make a fifth Subspecies at some point, they could call it: Bloodmouth: Subspecies V!