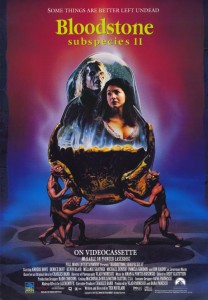 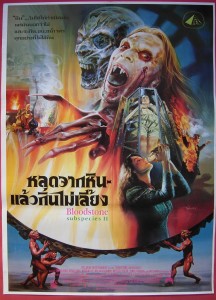 Anders Hove plays Radu with such over-the-top, blood-drenched charm that despite being the villain, it is nigh on impossible not to love the guy and root for him. Well, I do get my fair share of enjoyment out of seeing him get his ass kicked too; he’s a character that goes beyond any classification and delivers on every front. I literally smiled from ear to ear every time he came on-screen because I knew some good shit was about to come my way. While he’s not my favorite on-screen vampire, he’s definitely the most fun to watch, with Hove’s portrayal of Radu reminding me of a cross between Gary Oldman’s elder vampire from the opening of Bram Stoker’s Dracula and the silent terror of Nosferatu.

One of my favorite aspects of Bloodstone: Subspecies II is the clever use of shadows to heighten Radu’s vampiric nature. Radu casts cathedral-size shadows that tower over his prey, his long, thin fingers stretching out into the night. Radu also uses his shadow to penetrate locked gates and as a slick exit out of inhospitable rooms. It may all be old school smoke and mirror parlor tricks, but the shadow work in Bloodstone: Subspecies II is nothing short of awesome. Like the original before it, the film has an incredible, intoxicating atmosphere that permeates every scene of the film. When the film is at its most ridiculous, in the scenes between Radu and his Crypt Keeper-like witch mother, the atmosphere becomes a little too thin and transparent, but honestly this is of little concern in scenes as fun as these. I only hope that Radu’s mother makes a return for the next sequel, as she is easily one of the most fun walking corpses I’ve ever seen in a film.

Ted Nicolaou does a fantastic job with this one, and honestly, I think this is my favorite of his films so far. A lot of his previous output is horror comedies that never quite reached their full potential, such as TerrorVision and Bad Channels, so watching this series of films is like discovering his masterwork, leaps and bounds ahead of his other films. The original Subspecies may technically be a better film than Bloodstone, but Bloodstone is easily the more entertaining film. That might just be my love of over-the-top bad movies talking though, so you might want to take this with a grain of salt. Regardless of your stance on bad movies, it is impossible to withhold the respect deserved for the opening of this movie, as it is simply the best head reattachment scene you’re ever likely to see.

Next week… yep, you know the drill. Bloodlust: Subspecies III!