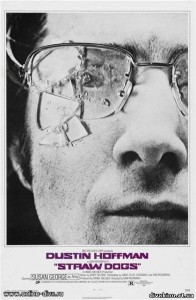 Reading the book prior to watching this is something of a blessing and a curse for this film. On one hand, it made me frustrated and I questioned why everything was changed or re-ordered in the film. On the other hand, without reading the book, I don’t think I ever would have made it through the whole thing because it’s so painfully boring and aimless in its first hour. As I stated in my review of the book, the first few chapters of it are slow and methodical, skillfully setting up the rest of the events but not always the most exciting reading. If this property had carried over to the film, perhaps it would have been better, but because of all the additional scenes and overall changes, this boring intro section lasts till nearly eighty minutes into the movie. WTF.

Let’s talk about the film’s controversial nature, specifically the rape scene. The book has no rape scene so one would expect that its inclusion here would have a meaning or purpose within the framework of Peckinpah’s version of the story. If there was any meaning to be garnered from it other than “women need to be pushed down and told what to do” then it is lost on me. This is the worst part of the book, the minor misogynistic theme, amplified to the nth degree and for no good reason. It’s disgusting and has no reason to be there, playing out more as a sicko’s pornographic fantasy than anything else. 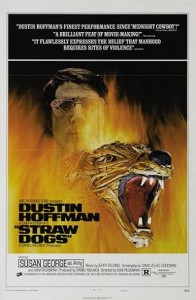 And oddly enough, the violence in the filmed version is actually toned down from the book! I was shocked. The kills are very over-the-top for the time and blood sprays bountifully from the wounded, but at the end of the day it’s nothing compared to the contained rage and emotion handed out in the book. David’s transformation into a determined protector of his home is never fully realized here as he stops to quietly contemplate virtually every act of violence he commits, and in the end he has to depend on his wife to save him in the final moments! In the book he gouges the last motherfucker’s eyes out!

Another very irritating aspect of the film was how Peckinpah decided to handle the character of Niles. In The Siege at Trencher’s Farm, Niles escapes from a mental institution, where he is held for life because he had raped and murdered some little girls many years earlier. He is mentally handicapped with the mind of an eight-year-old, so his punishment was not death as it normally would have been for any man fully in control of his faculties. In Straw Dogs, Niles is just the village pedophile and seemingly sane and able-minded. He’s not even in the movie much until Peckinpah decides to move along with the book’s storyline eighty minutes into the film. Anyway, the book’s character never does anything other than get caught in the middle, and because of his illness, it’s a true moral dilemma for George and the reader. In the film Niles clearly assaults two girls so the viewer cannot get behind David’s responsibility to protect him. In the upbeat and odd ending, David smilingly drives off with Niles in the seat beside him. This conflict works in the novel because of the ambiguity, but in the film it makes no sense, unless the point is to once again hammer home that David is a fucking idiot, which is something that comes up often.

As for the filmmaking, I’ve never been much of a Peckinpah fan and this does nothing to change that. The final half hour is the best part of the film in terms of raw filmmaking skill and editing, but nearly everything up to that point is disjointed and boring bullshit. Sure, there’s an interesting shot here and there, but it’s hard to be impressed by one shining gem surrounded by so much shit. I honestly wouldn’t be surprised if Peckinpah himself is the reason why Gordon Williams’ book has been out of print for so long, knowing that reading it would instantly tarnish any reputation this film has for being good and/or classic.

I know a lot of people like this, but I’m just calling it like I see it, and what I saw was pretty awful. It all would have been so much better if it had stuck to the book’s perfectly plotted narrative and snowy setting, instead of investigating Peckinpah’s desire to forcefully rape the women of his past that turned him down. There’s a remake coming out soon too, and at first I was frustrated that they had the balls to remake this “classic”. Now having seen it, I’m still frustrated that they’re remaking it, but not for the same reasons. Now I’m just angry that they aren’t making a proper filmed version of the book I read. Argh, hopefully more elements of it will be used, but I won’t hold my breath.

Oh and the music that ironically garnered the film’s only Oscar nomination is fucking awful.