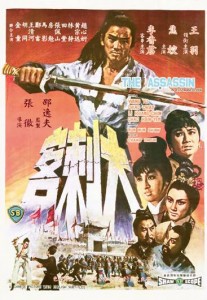 After the wide-reaching opening concerning the in-fighting between China’s many states, defining the tyrants and the honorable, the picture narrows its focus to Nie Zheng (Jimmy Wang Yu), a simple country kid studying martial arts along with a bunch of other commoners under the reputable Master Wu. When Master Wu is murdered, it causes Wang Yu to flee to a neighboring state. Meanwhile his good buddy Du Po (Cheng Lei) goes to work for a sympathetic official of the Qin state Yen Chung-tzu (Tien Feng). This doesn’t end well for Cheng Lei, as he faces off against multiple assassins, including notable (but as of this time period, still uncredited) Shaw Brothers choreographers Lau Kar-Leung and Tang Chia as the two major heavies. With his final breaths he tells Tien Feng of his friend Nie Zheng, who may be able to help him in his struggle against the tyrants.

As I said before, there’s not a lot of action in this one, but the dramatic tension and the buildup actually makes the release of the fight scenes that much better, especially the final climax. And let me tell you, that climax is something special. Not for its fight choreography, which is good for the time period, but for its usage of the heroic bloodshed motif as related to Nie Zheng’s absolute devotion to his family. The ending is a truly tragic and heroic display, the story threads built up over the two-hour runtime all paying off at once. It’s incredible. I said, “Goddamn!” over and over as it played out, both for the shock value of what just happened and for the incredible representation of family devotion. Again, the writing here is incredibly good.

Some of the Chinese opera creeps back in for one scene in which Tien Feng’s courtesans sing off Jimmy Wang Yu on his heroic journey. It doesn’t add a lot to the film, but at least it makes sense within the framework of the movie to have a song here. It’s not something coming out of nowhere, it has a clear purpose and is used for it. The rest of the musical score is very good overall, and includes pieces of John Barry’s score for the James Bond film You Only Live Twice. Not sound-alike music, the actual score. I can’t condone the blatant theft, but I’m a big fan of Barry’s work on the Bond series and surprisingly, his music works pretty well here too.

The Assassin is a high point for Chinese melodrama. If The One-Armed Swordsman was Chang Cheh reforming the action picture into something exciting and fresh, The Assassin is him reforming the Chinese historical epic. It puts similarly genred films like The Silent Swordsman to absolute shame for their lack of focused writing and true dramatic tension. The Assassin is filled with deep, relatable characters and tragic inner struggles and is one early Chang Cheh film not to be missed!