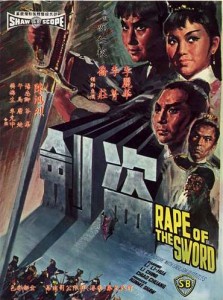 Directed by veteran Hong Kong filmmaker Griffin Yueh Feng, Rape of the Sword is a visual treat featuring a nearly fully formed Shaw Bros. shooting style, complete with snap zooms, telephoto lenses and that deft moving camera I love so well. The camerawork here is superb and is easily one of the best shot films of these early Shaw Bros. years. Where The One-Armed Swordsman is Chang Cheh defining and solidifying his style, Feng seems much more sure of himself and his methods. This is not the better film, but it’s clear from this one film that a lot of that iconic Shaw Brothers shooting style stems from his impressive work. The film also contains a hefty dose of ripped off Ennio Morricone music, and while I don’t condone the theft, I do love me some Morricone.

The film does have some flaws though, most notably its plot-driving songs. They slow down the narrative flow and seem out-of-place in this more revenge-driven actioner than in prior action/opera Shaw hybrids. As much as I rail against this “opera house bullshit” as I’ve called it before, I do truly enjoy these songs in and of themselves in these movies, and the ones in this film are especially good. It’s also interesting to compare the usage of songs within these films to their place in the Hollywood musical. The songs here are generally related to some sort of travel or mental breakthrough, a journey in either sense, and are usually sung alone or even within the character’s own head. It’s a much more contemplative expression of emotion than the bombastic Hollywood set pieces I’m accustomed to and I appreciate that difference.

Li Li Hua, Li Ching & Kiu Chong all do a great job in their respective roles, both in and out of the action. Kiu Chong was looking quite Jet Li-ish towards the end of the film too, something I’ve never noticed about him before. Chen Hung Lieh plays the villain with ease, a bit more campy than his role in Come Drink With Me, but it fits the film perfectly. I was happy to see one of my favorite supporting character actors, Lee Wan Chung, get a meatier role in this one, but sad to see my other favorite Tien Feng pull a nearly non-existent one.

The action here is good, better than most of the early Shaws that came before it, save The One-Armed Swordsman. There are lots of bloody, gory moments of heroic bloodshed and the final battle is especially impressive amidst the fiery backdrop of a burning home. The choreography seems to have stepped it up a notch too, with strikes coming at least twice as fast as is usual for the period. There’s a lot of under-cranked stuff here and there, which kills some of the tension, but overall it looks good. There’s also a fair amount of wirework, allowing Chen Hung Lieh to walk on delicate tree branches and Li Ching to soar up a flagpole to retrieve some stolen clothes. Of course there’s a generous helping of reverse-shot jumping onto rooftops as well, which as I’ve said before, never gets old. The fantasy elements here are very exaggerated and fun, with some minor martial techniques thrown in with all the jumping.

The ending pulls something of a Kung Fu Cult Master, leaving us on the edge of our seats for a sequel that will never come, but it’s not too big of an issue. Rape of the Sword is good fun and should satisfy a large portion of martial arts fans. It’s clearly not at the sophistication level of the latter-day releases, but it’s one to check out after you’ve seen all of those and you want to see some of the foundation they were built upon. As much as these movies are ultimately forgettable, they are unique and interesting and Rape of the Sword in particular is one of the more interesting of these early Shaws. Recommended to fans.