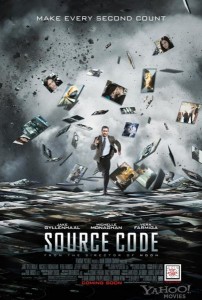 Expectations: High. I enjoyed Moon quite a bit and this looks good.

In terms of modern sci-fi films there are only a couple of names that register with me right now. I’m sure loads of others doing good work, but as of now, it’s only Christopher Nolan and Duncan Jones keeping hard sci-fi alive in my mind. Jones’ debut film, Moon, was a pretty good first film, even if it is more than a bit flawed. If nothing else, I was intrigued enough care about his next project almost sight unseen. So when he dropped Source Code and everyone seemed to collectively decide it was the best movie of early 2011, my interest was officially piqued.

Jake Gyllenhaal plays a military man tasked with the unique duty to find the identity of a terrorist bomber… after the bombing has already occurred. It’s a race against time as the terrorist plans to unleash a much more powerful device on the city of Chicago proper, so it is imperative that Jake works fast and with precision. I really shouldn’t describe any more specific plot details as a big part of the fun of Source Code is unraveling just what the hell is going on.

Jake Gyllenhaal carries a good portion of the movie with his effortless likeability, but he’s not without some cocky Gyllenhaal smirks sure to make many roll their eyes. This seems to be his trademark as he uses it in every movie I’ve seen him in, but thankfully in Source Code it’s mostly in check and I was able to disregard it. Jeffrey Wright is awesome as the crippled project leader, morphing himself into a handicapped, world-weary man completely unlike anything I’ve seen from him. Is this really the same charming dude from Casino Royale? It sure is, and if this is any indication, he’s a much better actor than the roles he’s been getting are allowing him to be. Vera Farmiga and Michelle Monaghan are both good in their respective parts, but neither are given a whole lot to work with, existing more as plot givers than anything else. And honestly, Michelle Monaghan isn’t even a plot giver, she’s more of a plot device to allow the members of the audience that need a romance to be satisfied. She really doesn’t serve much of a purpose beyond looking pretty.

Source Code is a great, thrilling ride, but it’s not really a thriller. Due to the nature of the recurring story-line, you know what’s going to happen just like Jake Gyllenhaal does after the first go-round. Thankfully the screenwriters knew better than to simply pull a Groundhog Day and go down the same paths over and over, instead as the film progresses the plot diverges quite a bit from where the story initially seems to be going. This adds a lot of intrigue and suspense to the movie, as the viewer uncovers what is going on as Jake Gyllenhaal does the same on-screen. We receive the same information he does and nothing more, so his journey is ours.

Now as for the ending, I loved it. The most overwhelming thing I heard about this movie before I saw it was that it was great, except that the ending is slightly sub-par. While I love the ending, I honestly have to agree. There are a few specific things about the ending that ruin its plausibility and it’s a shame as I think it is entirely salvageable with only a couple of minor tweaks. Minor quibbles aside, I still thought the ending was a great succession of science fiction ideas that work well enough for me to not give a shit about my problems. I agree that sci-fi ideas are fucking amazing when the logic is so perfectly worked out that everything makes absolute sense within the fictional world, but just like the ending of Moon, Source Code ends slightly less than it should have. It doesn’t change the overall impact of the film for me, but I understand that it will for others.

Source Code is a much more accessible and enjoyable film than Moon was, and if nothing else reiterates that Jones has a good eye for filmmaking and for crafting enjoyable sci-fi flicks. Sure it’s flawed, but it’s fun as hell and at the end of the day, that’s what really matters.