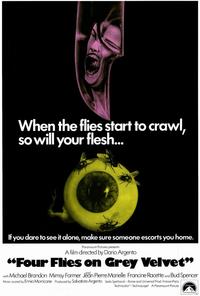 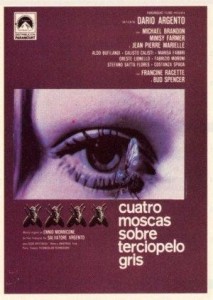 If only. I could care less about the shitty, recycled story if the filmmaking was up to snuff, but even Argento seems like he doesn’t give a shit about making a quality movie here. Four Flies on Grey Velvet has some inspired moments and shots, but even the murder sequences that typify Giallo films are very lackluster. Towards the end there’s a great slow-motion bullet shot and an even slower car crash that makes the final act a bit more exciting than the rest of the film, but literally any forward movement would be an improvement. This late in the film is ridiculous and pointless though. The best shot of the movie comes roughly halfway through, when a girl is murdered and falls down a flight of stairs, her head remaining in frame the whole way down as it bangs off of every step. It’s an amazing shot, so I’ll give Argento credit for that moment and a few others, but there’s not a lot more to get excited about here. No shit, the best overall scene in the film is the opening title sequence where Roberto’s band blasts out a killer Hammond groove intercut with an ominous beating heart and the titles. It alls ends with a great shot of the band through the sound hole of an acoustic guitar. “With this kind of setup, how bad can the film be?”, I thought.

Four Flies on Grey Velvet is well-shot, but is also very poorly paced and put together. It surprisingly doesn’t mine the great Argento sub-plot of memory, as the hero’s knowledge of the opening murder is never in question. It was a welcome change as I think he’s used it in every other movie I’ve seen of his, but honestly it would have added a lot of mystery and viewer interaction that was sorely lacking. The idea does pop up just a bit in a varied form, repurposed into Roberto’s recurring dream about a public execution, one of the few interesting aspects of the entire film.

Four Flies on Grey Velvet also features some absolutely ridiculous technology used as a narrative device that neither gels with the film’s style or makes sense. Argento reportedly didn’t want to use it because of this fact, but after seeing how it would look on-screen, couldn’t resist using it. Eh, it doesn’t look that cool, but to be fair, it does allow for a couple of quality shots and a good twist to take place. The problem is the science is so preposterous in such a serious film that I can’t imagine anyone buying into it, and I was under the impression that giallos were all about the reality of the situations.

Oh well, this was a complete mess of a film, but I won’t hold it against Argento. I know he later redeemed himself with the impressive but flawed Deep Red, and the very impressive Suspiria. I look forward to checking out the post-Suspiria films, but first I’m gonna check out the one he made after this one, the war comedy Five Days. One of these days… it might take a while to build up the fortitude necessary to brave it.