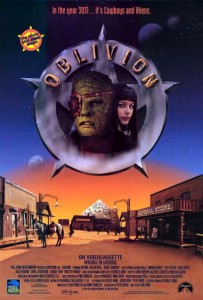 Oblivion hits tons of Western clichés throughout, but it never feels like the filmmakers were unaware of what they were doing, instead consciously using clichés to play their film off of the countless number of Westerns that came out of the early decades of cinema history. Besides, clichés are cliché for a reason. Any good Western that obliges my desire to see dudes falling to the street from a second story banister in slow motion is good in my book and any reasonable justification of this is fine by me. Not that I need a justification. 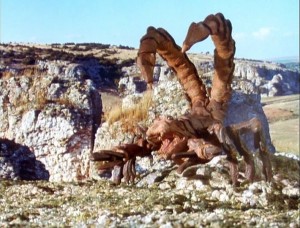 The film also features a bunch of cameos from stars everyone will recognize and some only B-Movie fans will. The biggest of these roles is George Takei as the town’s requisite doctor/robotics expert and alcoholic. He delivers each line with such gusto and deep gravel that it makes every appearance a joy to watch. It’s not always good, but it’s perfect for the movie and the role he’s playing. There’s also five or six direct references to Star Trek woven into his dialogue, but they’re written well enough to elicit more laughs than groans. Other cameos include a one-scene role for Isaac Hayes, a small bandit role for Jeff Moldovan from Trancers 4 & 5, Julie Newmar as a Madame and Meg Foster in a sizeable part as the robotic deputy.

Director Sam Irvin crafts a well put together film, with interesting shots and quality editing. The opening sequence when Red Eye lands his ship and then walks into town is one of the best composed scenes I’ve seen yet in the Full Moon library. Careful framing and editing make sure to not reveal Red Eye’s face until the critical moment when he confronts the Marshall, another tried and true film cliché, but one that works so well I can’t complain. This is another Full Moon script by comic scribe Peter David and it’s just as fun as his other work for the company. It straddles the line between competent & insane, resulting in a finished film that is quite entertaining.

Andrew Divoff does a fantastic job as the villain Red Eye, despite the full-face makeup appliances he had to wear as the character. I’m always more impressed when an actor is able to create a memorable performance through makeup, as it has to be an incredibly hard thing to pull off so well. The makeup is excellent as well, which doesn’t hurt. In fact all the special FX are quite good throughout, from severed, regenerating arms to weird throat-biting frog creatures.

Oblivion isn’t the best example of a sci-fi western, nor is it the worst. It is a hell of a lot of fun though, and anyone looking for a good cheesy time will be in for a treat. There’s more than enough lunacy to go around and the FX are great. Not to mention Musetta Vander, who plays Red Eye’s whip-wielding, seductive sidekick Lash with the sadistic tendencies to match her stunning good looks. It’s a good thing I liked her as I think she figures prominently in the sequel!

Next week, the adventure continues in 1996’s Oblivion 2: Backlash!