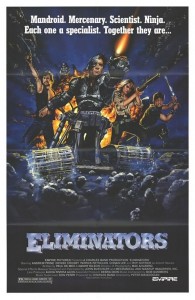 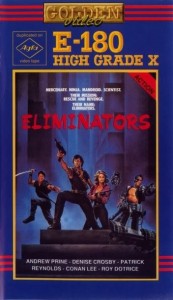 Technically the film is as sound as all the other 80s Empire productions. It’s been a while since I’ve watched one of these so I had forgotten how much higher the budgets were compared to the later Full Moon movies. There’s so many more FX and explosions. Peter Manoogian later went on to direct such favorites as Arena and Demonic Toys, but the sense of ridiculous fun that permeates those movies does nothing to prepare you to see this film (provided you saw them backwards like I did). Eliminators is one of the most reckless and wacky movies I think I’ve ever seen, it has steel cyborg balls for the amount of shit it rips off and throws into one movie.

Most people making a movie about a cyborg would try to keep it fairly centered on him and the science fiction aspects. Instead, as soon as we move into the return journey part of the film and meet up with Harry Fontana, the film shifts gears into a river adventure that is equal parts Indiana Jones and Star Wars… only to later mix in parts of From Russia With Love (complete with the acknowledging line of dialogue, “I saw this in a movie once.”) and The African Queen. Not to mention all the scenes with the Neanderthals and the Roman soldiers. Titling the film Eliminators is also part of the celluloid gumbo, giving a name to the ragtag team of characters and throwing them into some sort of crime-fighter superhero roles. Perhaps if this film was successful they could have gone on to eliminate other evil time-traveling geniuses with bad complexions.

Honestly, this is a hard movie to review for me. It’s a movie to have fun with and it’s technically sound so just jump in and roll with it. The ninja is a bit underused, but towards the end there’s an awesome stunt where he jumps through a moving fan that is blocking their progress. The dialogue is also a bit stark at times, painted in broad, basic strokes and to-the-point responses, but this is nothing different from the big-budget action blockbusters being made now so this shouldn’t be too big of a stumbling block for most. Eliminators may well be the most mashed-up piece of work in the history of cinema. It is the definition of throwing everything but the kitchen sink into a movie. Surprisingly it works pretty well and Eliminators comes out on top, as a ridiculously fun movie for a cheesy Saturday night.

Next week, I’ll be checking out another 1986 Empire robot movie, Robot Holocaust!