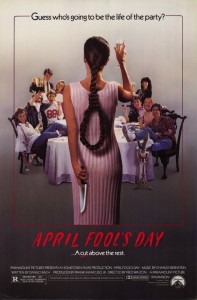 April Fool’s Day is actually a lot tamer than most slasher films, featuring no exposed breasts or the abundance of fornication between consenting individuals you might expect from a film that throws ten people into a mansion on a secluded island for Spring Break™. Don’t get me wrong, the sex is ever-present within the character’s conversations, it just doesn’t permeate the movie as you might expect from the setup. I was surprised at the level of frank dialogue about sex and fetishes, making April Fool’s Day seem a lot more modern than 1986. The film is also very light on gore, with only a few severed heads and light wounds to whet your appetite. So if all this is true, where does April Fool’s Day gain its credibility as a horror film?

Suspense. It doesn’t really hit until after the midpoint of the film, but when it does, it rips that rug out from under you with one intense pull. What had been a fun little teens-on-an-island tale, turns sours fast and director Fred Walton makes the shift quickly and with skill. He previously directed the genre favorite (which I still need to see) When a Stranger Calls, and he proves that he knows what he’s doing behind the camera with good framing and editing that increases the tension in key moments. There’s also some sections of the film captured on a home video camera that feel very ahead of their time, given the prevalence of handheld use in movies these last fee years. It is another touch that keeps the movie feeling modern, although I think a more mainstream viewer might just laugh at the quality of the footage, instead of drawing parallels to current cinema.

The plot is pretty basic, with the rich kid Muffy inviting a bunch of her college friends to her East Coast mansion on an island for Spring Break™. Obviously, with this kind of setup in a horror movie things aren’t going to go as planned. One kid get picked off by a prank-gone-wrong before they even get to the island! I guess Muffy’s idea is to have a small-scale version of the debauchery that happens in a more traditional Spring Break™ setting, with the guys all hoping to hook up with one or more of the girls. Some of the girls seem to share this desire, which furthers my surprise that it never really goes there. Other horror movies would completely forego any semblance of a plot and go straight for the nudity, so credit must be given to the filmmakers for keeping the film respectable and out of the trash bin. As much as I love the trash bin.

My only real criticism of the film is that it’s fairly easy to figure out what’s really going on beneath the surface. A couple of things are telegraphed well before any of the reveals, so an attentive viewer will most likely see them coming. Even still, I’ll admit there were a couple of times where they really surprised me though, so maybe I should give the film more credit. In any case, April Fool’s Day completely succeeds as a suspenseful horror film, especially within the final half hour when the suspense it at its height and everything is firing on all cylinders. It’s also a treat to see Thomas F. Wilson (Back to the Future‘s Biff Tannen) in another movie, even if he does play a similar thick-head character.

If you’re in the mood for a 70s style suspense film mixed with light-hearted 80s horror without too much gore, April Fool’s Day will be a perfect companion on this prank-filled day.