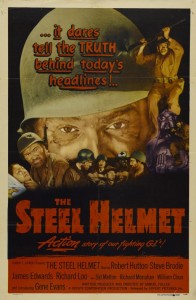 Expectations: Love it, and hoping to get some more out of it the second go-round.

After a long hiatus, I finally return to my Samuel Fuller series. I have seen this film once before, about ten or so years back, and I was simply blown away. It was the second Sam Fuller movie I had seen, but the first that I truly loved. Shock Corridor was the first for those that care, and that one is so out there that I had a hard time wrapping my head around it in any meaningful way the first time around. I didn’t dislike it, but I didn’t necessarily like it either. The Steel Helmet however, took me by the scruff of my neck and threw me directly into the fire and the passion of Sam Fuller’s best work. 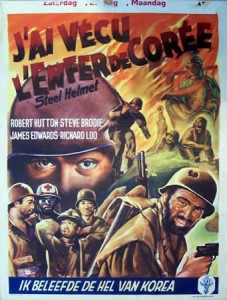 The Steel Helmet tells a simple tale of a dogface solider, Sgt. Zack, as he travels across the Korean countryside with a young boy, Short Round, who saved his life. They eventually meet up with other Americans, with whom they travel to a Buddhist temple being used as an enemy observation post. The story itself doesn’t matter so much as the characters and the way they specifically react to the situations. Fuller is not one to pull punches and for his first war film he set out to show a much more realistic view of war than any previous film had done before. The soldiers share both good and bad traits, doing their best to survive.

The film was made in 1951, a time when segregation, the Red Scare and the Korean War still raged. This makes the message of The Steel Helmet all the more powerful and controversial, as Fuller points out all kinds of American hypocrisy throughout the slim runtime. I can’t even imagine how audiences would have reacted to something like this back then. According to Samuel Fuller’s autobiography A Third Face: My Tale of Writing, Fighting and Filmmaking (which I highly recommend to anyone interested in old Hollywood), The Steel Helmet was a surprise box office hit that stirred up FBI investigations of Fuller for being Anti-American, as well as paving the way for his studio career and collaboration with Daryl F. Zanuck. Obviously the film is not Anti-American, but simply truthful about the nature of war and The Steel Helmet proves just how forward-thinking and trailblazing Samuel Fuller was as a filmmaker.

Sgt. Zack (played by Gene Evans in his first major role) is a loud-mouthed World War II veteran chomping cigars and spouting sharp-tongued advice. He’s the film’s main character, and is in the role generally filled by the hero, but he’s really quite the anti-hero. When a private finds a soldier’s dead body off the path, Zack suggests that they should leave the body alone because he’s dead and no one cares who he is now. He’s more concerned with devouring the melon in his hands than the death of a fellow American. The commanding officer tells the private to grab the dead man’s dog tags, despite the Sgt.’s words. The private runs back to the body and as he grabs for the tags, the body and the private explode. After the sound has diminished, Zack asks the commanding officer if he’s ever heard of booby-trapped bodies and then quickly asks if the private had his backpack on him, as he was carrying the cigars Zack wanted. Zack would rather continue belittling the authority figure and make sure his cigar supply is refreshed than waste time on the recently dead. No hero could be so callous.

Zack is not without a heart though, and the pain of war shows through his steel façade from time to time. Gene Evans gives off one hell of a début performance, playing the part of Zack to absolute perfection. At one point, the studios approached Fuller with the idea that The Steel Helmet could become a studio picture with John Wayne in the title role. Thank God Fuller got his way because this film is the furthest thing from the traditional Hollywood Gung ho war film. John Wayne’s involvement surely would have doomed the project to this mainstream hell. Evans, on the other hand, takes the picture into dark and murky waters with a subtle, forceful performance that should have made him a big star. 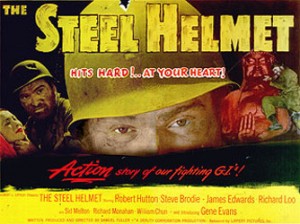 Fuller confronts not only the ambiguous nature of war, but also racism head on. This comes in the form of a couple of conversations the North Korean prisoner has with the African-American medic and the Japanese soldier. I can imagine the frank nature of the dialogue threw some 1950s viewers for a loop, as the scenes single-handedly make you question our treatment of non-Whites in America and make you think about the blurred line between the evil of the enemy and the evil of ourselves. By now, this kind of thing won’t shock audiences the way it must have in 1951, but any regular viewer of classic films should be surprised at the level of direct and honest talk that goes on in such an old film.

Fuller ends the picture with a single sentence over a beautiful shot of the surviving soldiers walking away. “There is No End to this Story,” it says. With The Steel Helmet, Fuller hoped to show the crazy confusion that permeates all violent conflicts and how this particular story is not over and never will be until we as people make a fundamental change to our way of doing things. It is a powerful final message that caps off a wonderfully made film that also features one of the greatest opening shots I’ve ever seen. The Steel Helmet is Samuel Fuller’s first truly great film and one that should be on any self-respecting film fan’s growing list of movies to see.