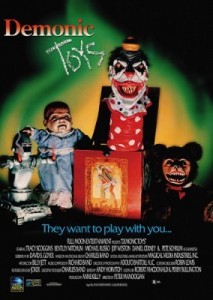 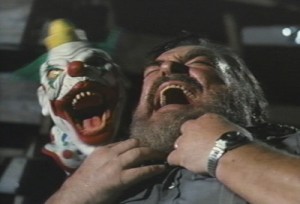 Years before he went on to write Dark City and help Christopher Nolan write his Batman films, David S. Goyer was an up-and-coming screenwriter who wrote a few films for Full Moon. Goyer’s script here is noticeably more lively than your average feature from the company and the dialogue is more enjoyable to listen to. I’m not saying it’s high art, or that it’s even all that good, but for a Full Moon movie the dialogue is a lot punchier and fun. That being said, it is not without its share of cheap clichéd dialogue such as, “No! Oh God! You bastards! Goddamn you!”

The story falls into two general horror categories, the “People Stuck in a Location” old standby and the lesser used (but still popular) “Fetus That Will Be Possessed and Born as a Demon”. Not to mention the obligatory mini-attacker sub-genre Full Moon made famous. Combining the sub-genres is a novel idea and I have to give them credit for selecting a location to get stuck in that I’ve never seen in a horror movie. A toy warehouse. I’d like to imagine they shot it in the actual Full Moon warehouse to cut costs, but I have no way of proving that. 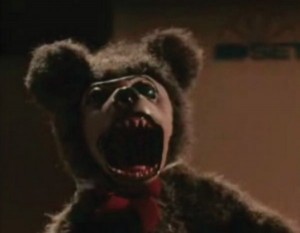 What is clear is that they really spared no expense on the special FX. The toys are comprised of a couple of different styles, from hand puppets (Jack Attack, the jack-in-the-box) to complex animatronic-headed Baby Oopsie Daisy, to Mr. Static the robot who isn’t marvelous in his execution but his optical laser blasts are pretty awesome. There’s also a bunch of killer stop-motion by Dave Allen and his team. Between the toy soldier and the alphabet blocks ominously spelling out the human’s doom, this is yet another example of the top-notch stop-motion work they do.

The film moves at a brisk pace through the first forty-five or so minutes. It drags a bit in the middle, but the last twenty minutes are pretty much non-stop carnage and it’s damn fun to watch. If you’ve ever wanted to see toys get shot in the face with shotguns, then this is your movie. The toys mount a massive uprising to overcome two of the  trapped humans, but the humans retaliate with a barrage of 9mm shells and shotgun blasts. It’s ridiculously satisfying. The cherry on top was when Baby Oopsie Daisy takes a direct shotgun blast to his foul-mouthed face, causing his head to explode into a glorious white mist. 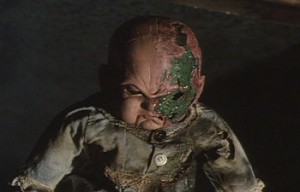 The featured toys themselves aren’t nearly as endearing as the Puppet Master characters, but that’s somewhat by design as we’re supposed to be rooting against these guys. Baby Oopsie Daisy is easily the worst of the bunch though, with his unfunny clichéd potty-mouth. Although this film came first, the only thing I can think to relate it to is the bullshit turkey in Thankskilling. Jack Attack is pretty fun, gnawing into people’s faces, as is the Grizzly Teddy. Mr. Static doesn’t do much, but his laser blasts add some fun.

Overall, Full Moon heaped a ton of different ideas into this one and they surprisingly work well together. Peter Manoogian handles the camera with a steady hand and captures the feeling of being trapping in an old, filled-to-the-brim warehouse of toys. There’s even a couple of callbacks towards the end to the old Empire film about killer toys, Dolls, which I thought was a nice touch. It’s trashy, it’s over-the-top, but it’s pretty fun if you dig this sort of thing.