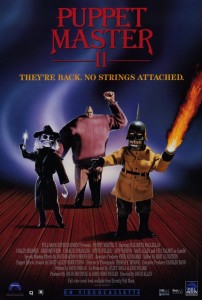 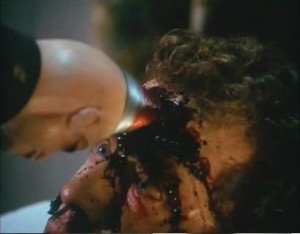 Toulon needs brains in order to keep his puppets alive, as the puppets used up all of their Egyptian-enchanted Brain Juice to revive Toulon. He sends out his creations to get him the fresh brain meat he needs and Toulon fashions a new puppet, the Nazi-themed Torch, who has bullets for teeth and a flamethrower hand. He’s easily one of the coolest looking puppets in the series so far and he gets lots of great screentime. Until you’ve seen this menacing puppet blasting someone with a jet of fire, you can’t begin to understand just how gratifying an experience it is.

Stop motion wizard Dave Allen takes up the directorial reins this time around and does a great job. As you might expect, the puppets get more screentime with him in charge and they do not disappoint. The puppets are of such a high quality that it’s very easy to forget you’re watching a low-budget horror movie. Each puppet is represented on-screen by a regular puppet controlled with wires and rods & a stop-motion version for more intense motion. Pinhead also gets a puppet body/human hand combo that never fails to make me laugh. The stop-motion FX are once again the standout here, but each version of the puppet serves its purpose well. Throwing a physical puppet against a wall works much better than trying to animate it! There’s more gore than the first film, but there’s still not a whole lot. What’s here is good though, and this isn’t trying to be a gorefest, instead playing more to the fun aspects of horror so often overlooked these days. 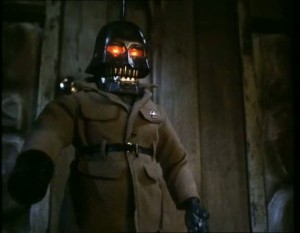 The acting is over-the-top and ridiculous, but is still a step up from the first film. The humans are still stupid and unlikable, but that’s the point, as we’re rooting for the puppets to get their brain juice so they can survive past the credit roll of Puppet Master II. The inclusion of Toulon as a character throughout is great as well, even if he doesn’t specifically feel like the same character seen at the start of the first film. He’s wrapped in bandages Invisible Man style for most of the film, which gets kind of played out by the end, but when the finale comes and all is revealed, you can’t argue the sheer entertainment provided by these moments.  His character is more fleshed out here too, with a flashback interlude in Egypt connecting the film to yet another Universal monster movie, The Mummy, which features a similar flashback device. In fact, Toulon’s backstory is almost completely ripped off from Imhotep’s in The Mummy, complete with the reuniting and obsessing over a doppelgänger version of his dead wife. This is admittedly lazy and tired, but I enjoy both this film and The Mummy enough to not mind so much. Plus it allows for lots of great Full Moon moments that wouldn’t have been possible without the lifted plot points.

Puppet Master II is a great follow-up to a pretty good first film and ends in a fantastic way, paving the way for future sequels. Full Moon did the unexpected with Puppet Master III though and went the prequel route! I can’t wait till next week!